The design idea for this house in Madrid (Las Rozas), arises from the intention of generating a ground floor in the manner of the old Greek gallery called Peristilo, which was formed around the courtyard of the dwellings. This Greek architecture space served all the rooms of the house and was characterised by being a space surrounded by columns and open to the courtyard, situated in the centre of the dwelling.

Following this idea, a very diaphanous ground floor is proposed, in the manner of a Peristyle, a continuous space flanked by stone walls instead of columns. These walls slide and are oriented in four directions, organising the space and the rooms. Each one of them will have a unique character due to its independent orientation and visuals, since it is the Peristyle that unites them.

The interior courtyard, in the centre of these walls, becomes the axis of the architecture project. It is configured as a double-height interior courtyard that communicates the entire dwelling. A large skylight is placed over it, which gives it constant lighting throughout the day.

On these large stone walls rests a box of harmonious and simple geometry, materialised in a more abstract form. This box works as a viewpoint towards the surrounding area and houses the bedrooms of the dwelling. The double-height interior courtyard organises and communicates both floors. 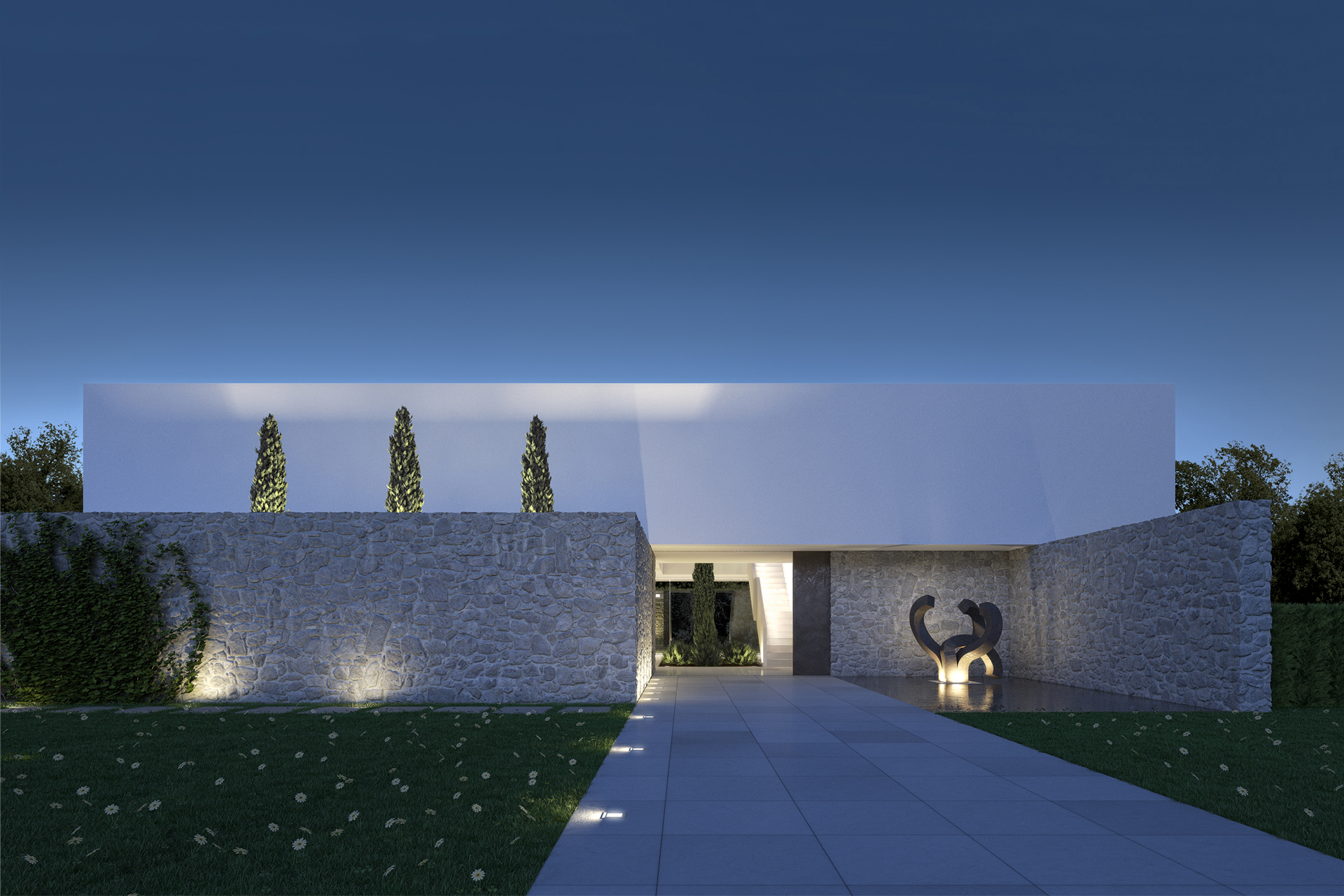 The dwelling is conceived as a continuous path, without circulation spaces, interrelating the spaces but endowing each one with a character and visuals that make it unique.

The access, imagined as part of the architectural path, begins the walk next to a shallow reflecting pool that boosts the project volumetry with its reflections and where a sculpture acquires protagonism, the courtyard being the end of perspective. This becomes the axis of the plants, around which the spaces are organised, enhanced by the zenithal light coming from the skylight that falls on it. 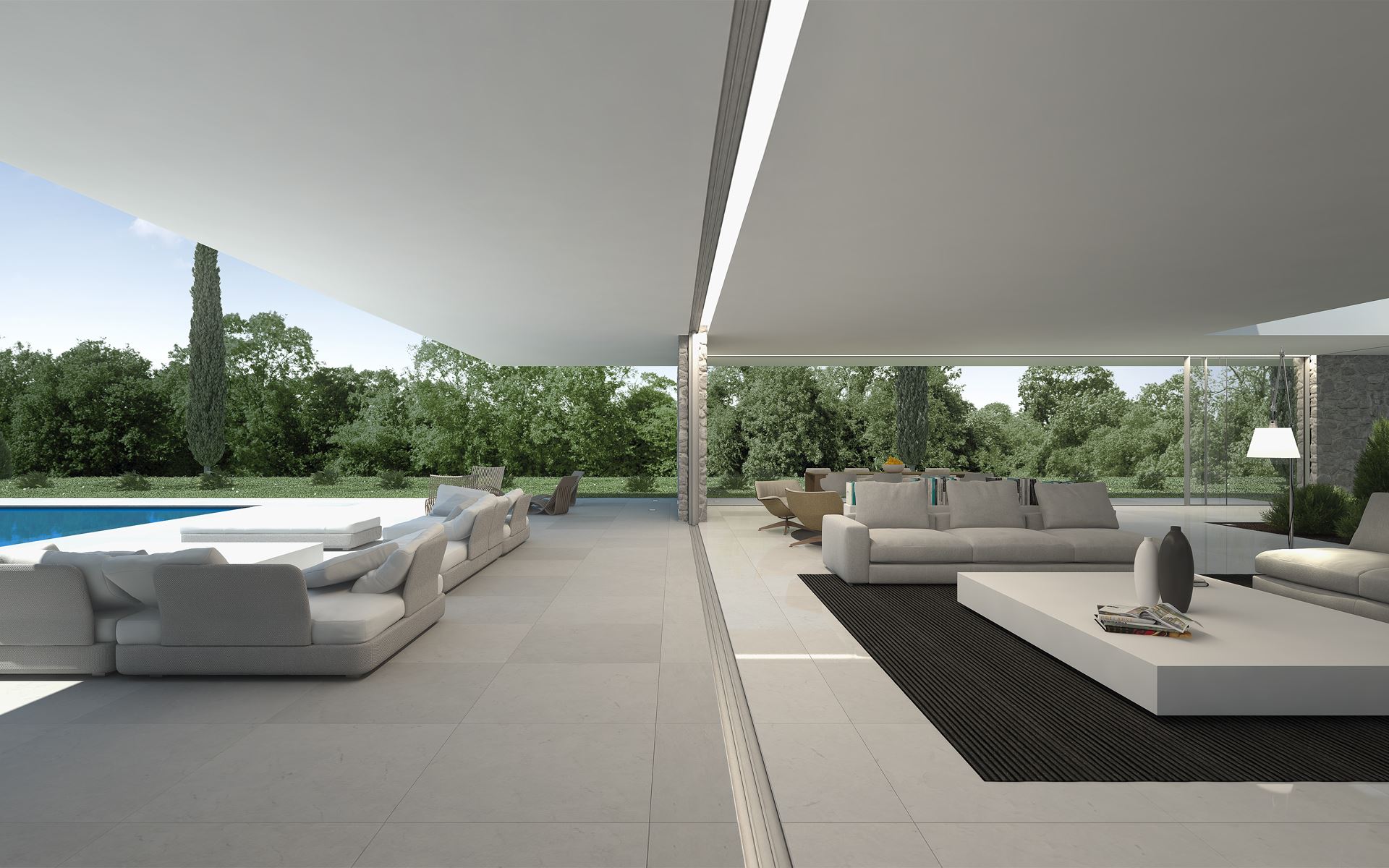 On the ground floor, each space enjoys a visual and orientation suitable for its use, which is enhanced by the extension of the stone walls. In addition, the sliding of the upper box generates a series of covered spaces that prolong the sensation of amplitude.

On the first floor a simple system is proposed around the patio, locating the children’s bedrooms to the southwest along with a large play terrace that relates to the outdoor space of the pool.

The master bedroom, understood as a special and quieter piece, faces northeast, where a greater privacy is achieved thanks to its terrace. In the house, the design of a large workspace relates these spaces, a place to work or study and contemplate the vegetation of the courtyard next to incredible views of the golf course in the surroundings of Madrid. 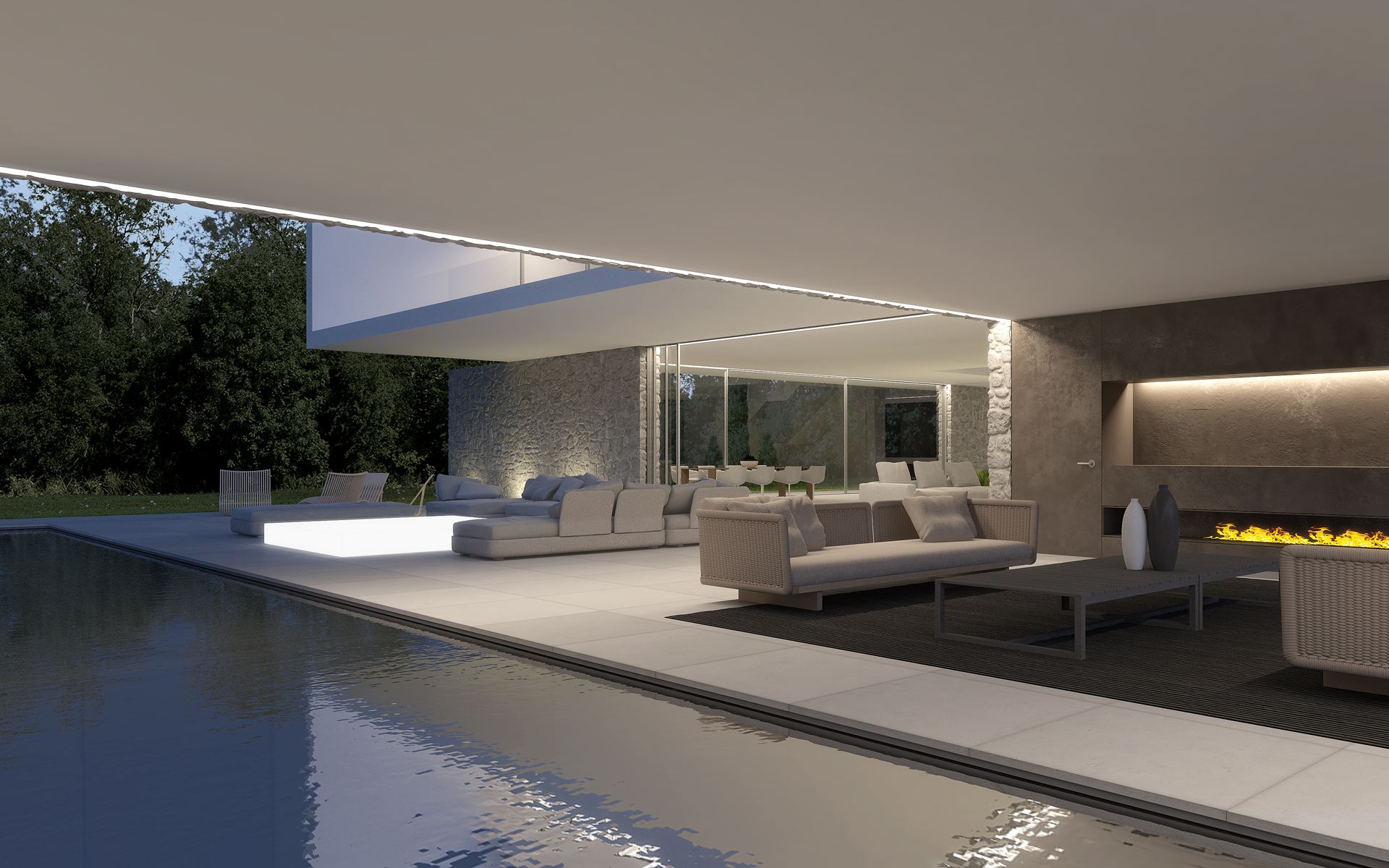 Through its materiality, the housing design seeks a game of textures and colors that enhances the idea of an abstract element resting on the walls.

The large sliding walls are made of stone, which gives them a play of shadows and highlights. This material allows to anchor it to the place and to generate a relation with the raised vegetation. 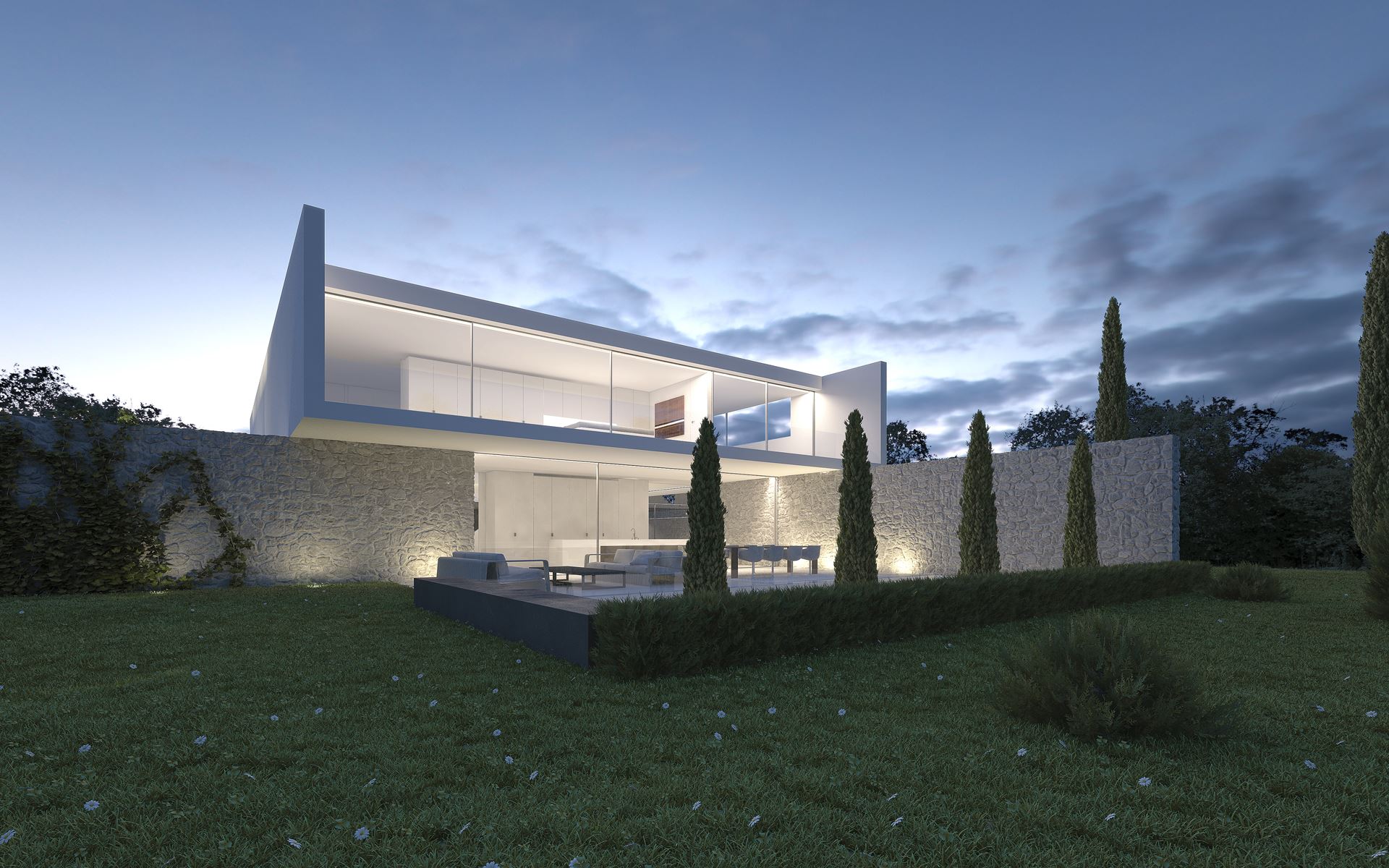 The upper piece is solved with a thermal insulation system on the outside that provides greater thermal comfort by taking advantage of all the thermal inertia of the enclosure. It also allows a continuous finish, without joints, which gives it an object or abstract piece sensation.

All this is combined with the brightness of the large glass cloths that are placed throughout the house as well as the natural wood elements of reddish-brown tones that generate a pleasant combination of tones. The interior design of this house in Madrid opts for matt white lacquers to enhance the lighting and its reflections in all the rooms. 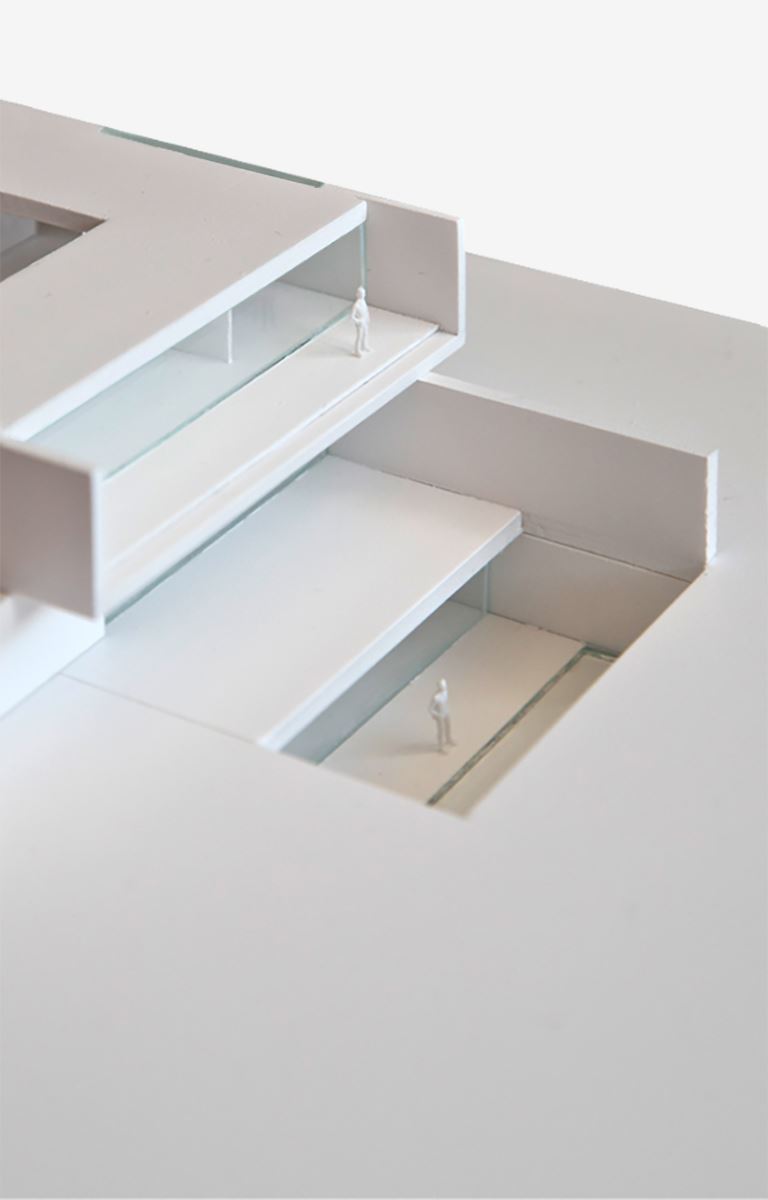