BETWEEN OAKS AND MOUNTAINS

Located in a residential development in the municipality of Valdemorillo, Madrid, with the nearby presence of the Valmayor reservoir, the distant reflections of the city on the horizon and the powerful silhouette of the Sierra de Guadarrama to the north and west. To the south and east you can see the wide river plains that follow their path towards the Tajo, a vast landscape of a sea of oaks.

The whisper of the leaves caressed by the fresh wind of the sierra. The undulating shade of the trees sliding down the warm walls. Walls that move forward and backward in search of the appropriate privacy of each space. Powerful garden terraces that in audacious cantilevers form covered spaces that, uninterrupted, penetrate the diaphanous interiors of the rooms, between wide windows and textured woods.  At their feet, the sheet of water that reflects a solid architecture of pure geometry. And on the horizon, the vast sea of oaks that vanishes into the distant south… a dreamlike place to live. 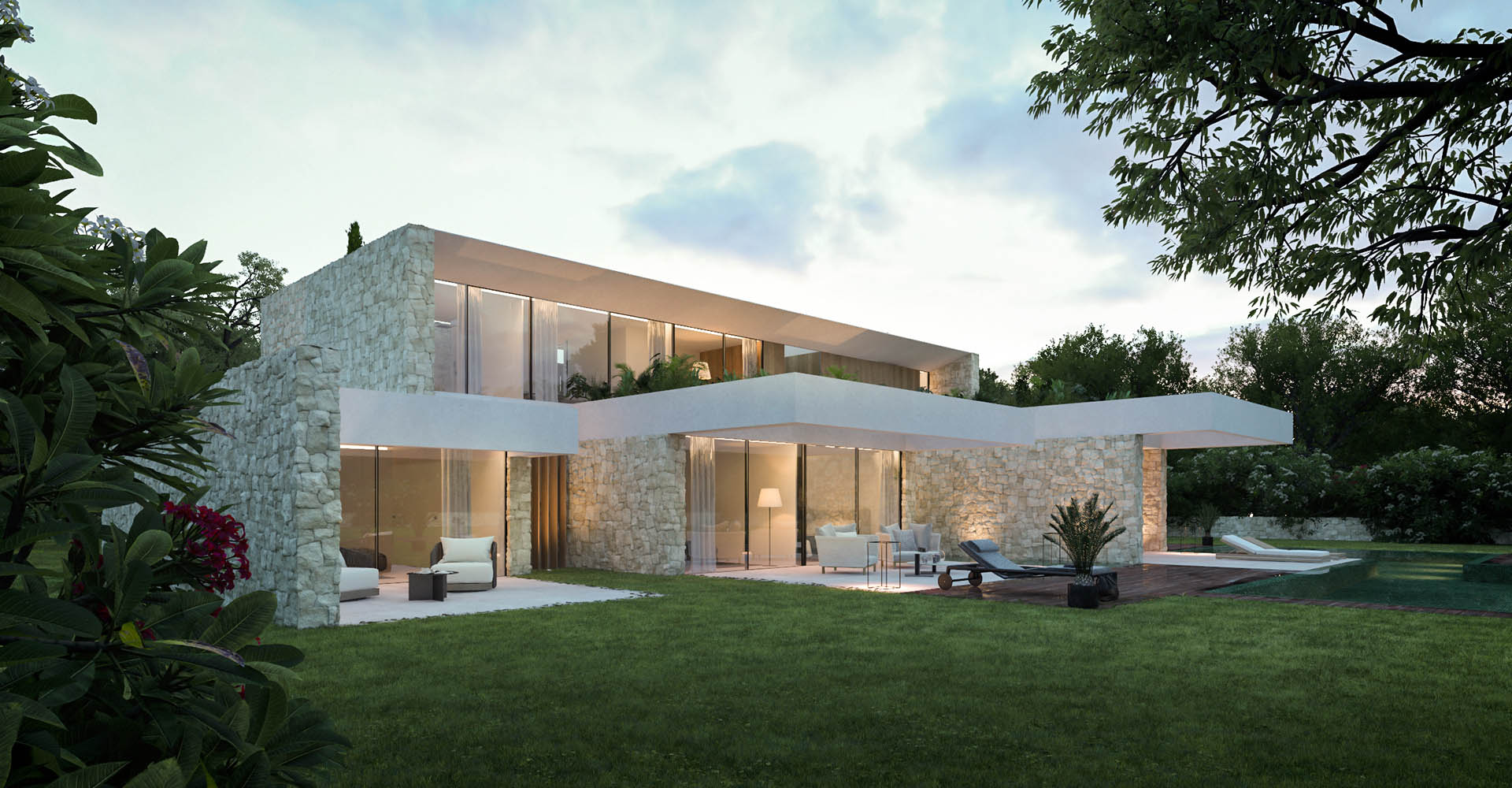 SHAPE AS ADAPTATION TO CLIMATE AND PLACE

The plot is endowed with the invaluable presence of an important group of oaks. These are distributed in two groups, one huddled in the northern half and the other more dispersed towards the southern area. The central third is clear, so its preservation is not only desirable, but perfectly feasible.

The estimation of the shadows thrown in the most unfavourable future, considering the maximum buildability of the adjacent plots and the influence of the pre-existing trees, shows that the area of greatest solar capture of the plot is delimited in its central third, being this the ideal area for the implementation of the house.

Taking into consideration the solar arch of the plot, the criterion of having the protective spaces to the north is established, leaving the living spaces open to the south. The north facades are therefore configured by opaque walls with few openings, while the south facade displays large openings.

Since most of the openings are oriented to the south, a fixed solar protection is designed by means of cantilevers that manage to form an angle with the ground of 55°, allowing to shade a great part of the hours in which the solar radiation is harmful without obstructing the sunshine during most of the hours of solar capture. The overhang will also be permeable to avoid heat accumulation. 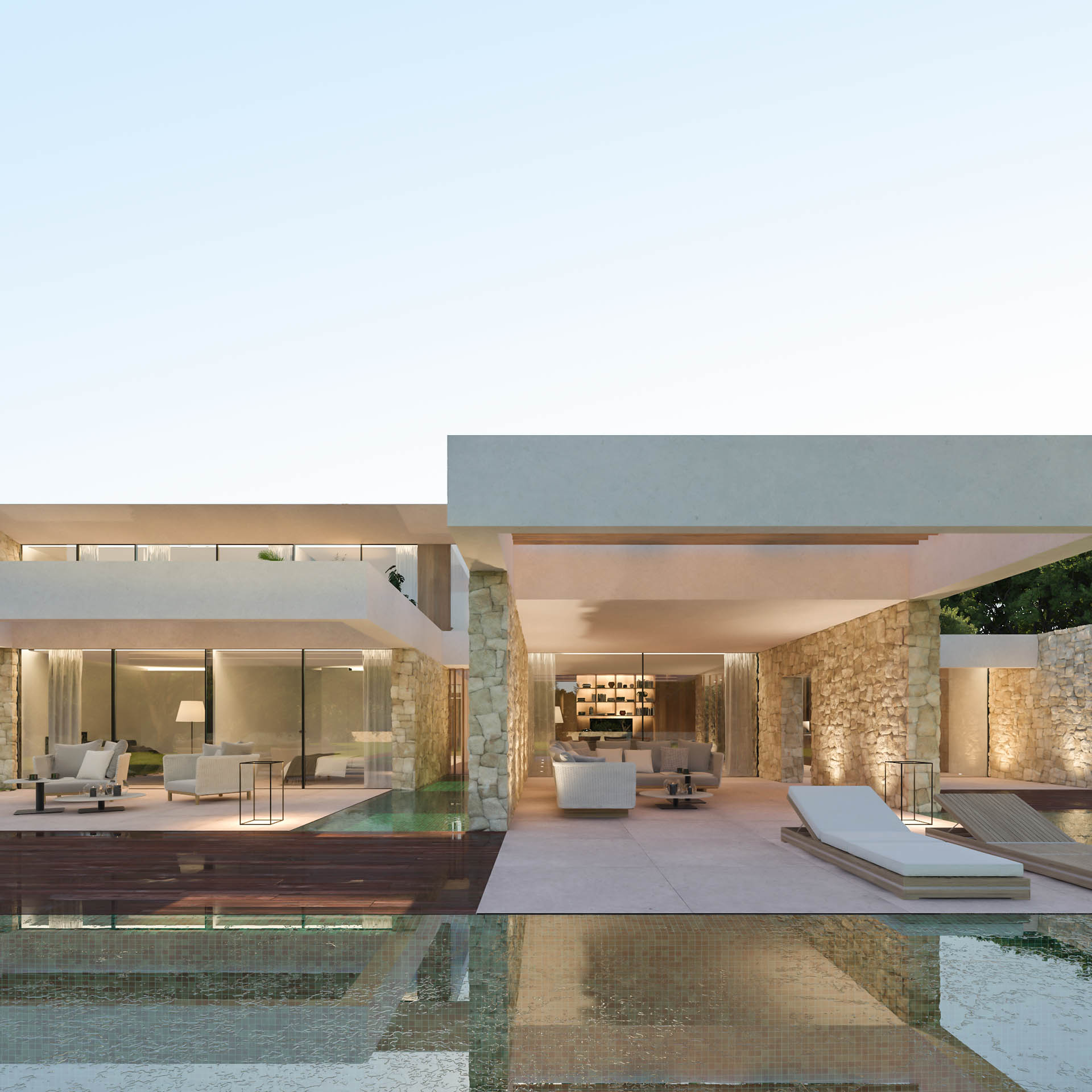 The lightweight pavilion on the upper floor rests on this strong base. Refined in slim edge, under its cover the exclusive uses of the marriage are developed, working like a privative piece: the jealous refuge of the intimacy in couple. 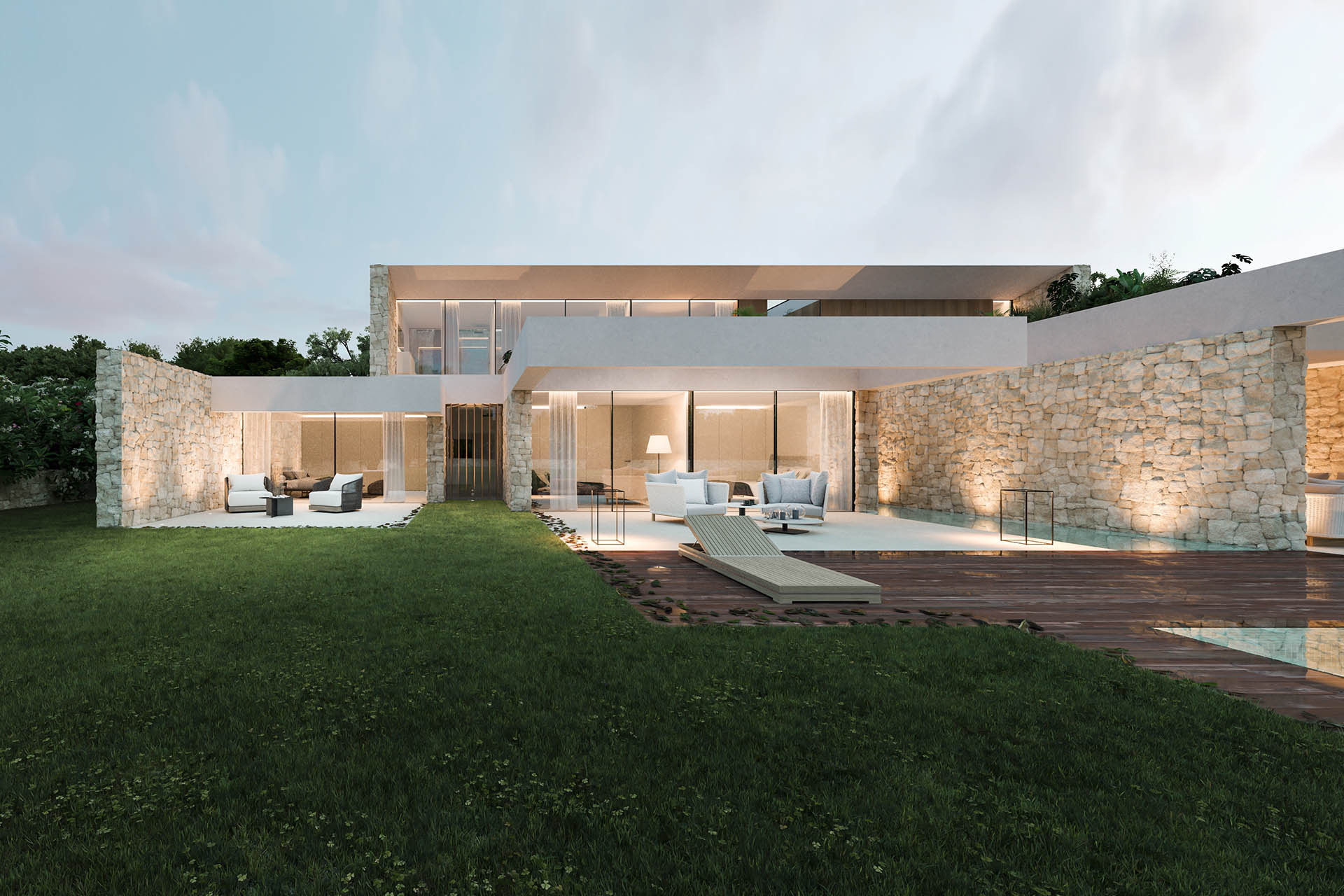 SYNTAX OF STONE WALLS AND CANTILEVERS

In a diaphanous first floor, where the limits between the interior and the exterior vanish and the relationship with the garden space becomes intimate, complete, it is essential to establish mechanisms that guarantee the adequate degree of privacy in each room. The structural walls are, in this sense, the ideal element to achieve this visual independence between the parts without giving up a full integration with the environment. The relative sliding between these vertical surfaces, in a perfectly orchestrated dance, prevents visual crossings between rooms, avoiding indiscreet looks that would ruin the feeling of comfort in the house.

From these solid walls are launched rounded cantilevered garden terraces that with their permeable shadows refresh the outdoor spaces and protect the interiors from unfavorable solar gains. On its vegetal surfaces, the uses of the upper floor will find expansion areas of great spatial quality. 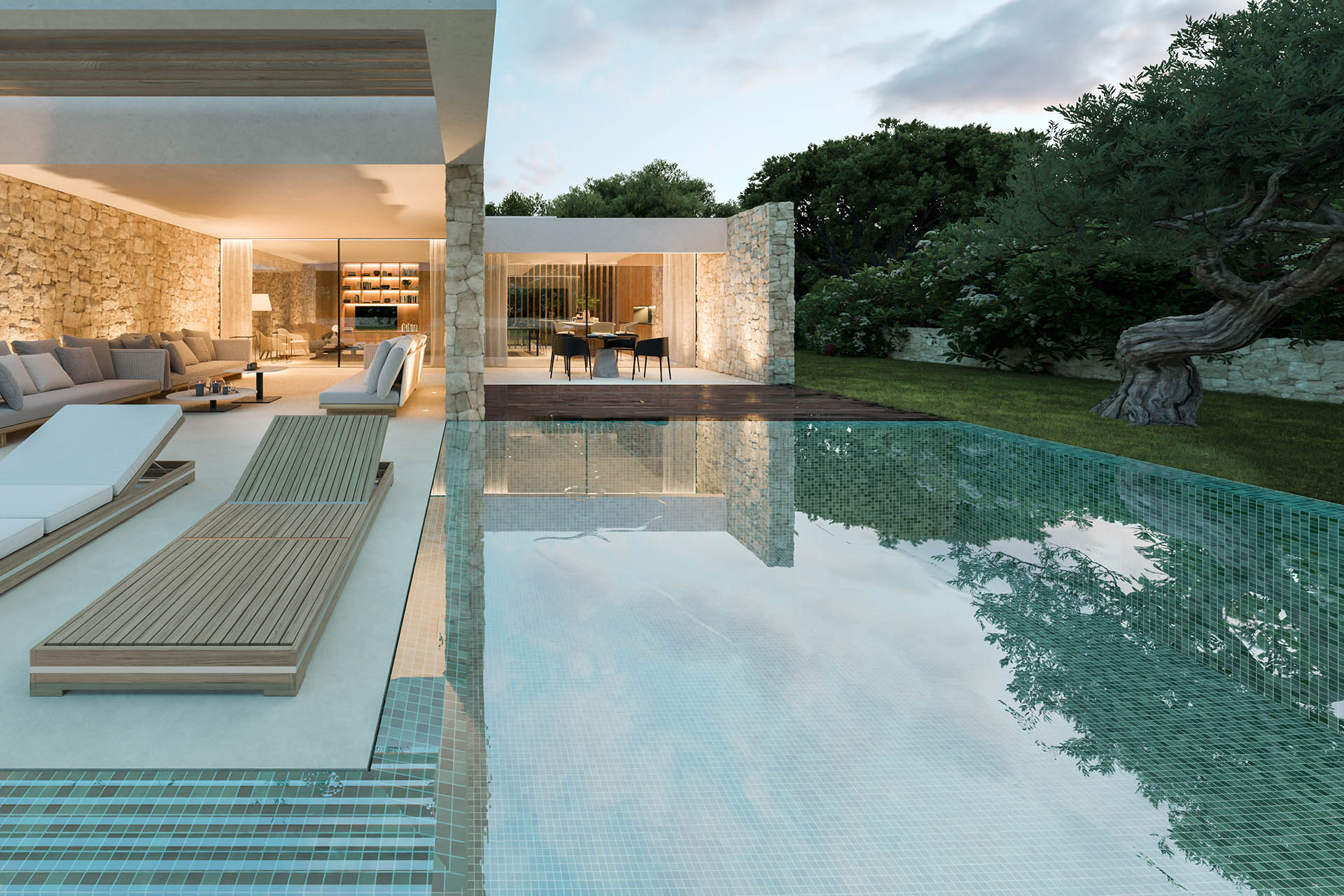 MATERIALITY, THE LINK BETWEEN THE HOUSE AND THE LANDSCAPE

The house is designed with a series of noble and organic materials that transmit at the same time the relationship with the natural world and the warmth of the domestic interior, achieving the intended harmonious balance between the architecture and its environment.

Locked with local stone, the masonry walls, with their rough sturdiness and warm presence, manage to link the architecture with the land on which it sits. It is also the sobriety of the stone that extends uninterrupted between the interior and the exterior through a pavement that adjusts its stereotomy to the diaphanous surface of the first floor. The cosy texture of the wood covers both paved surfaces, on the upper floor and outside spaces, and vertical walls with panelling or fine strips, which allow for adaptation in the opening of gaps, varying according to circumstantial needs. The large transparent glass surfaces are the main architects of a fluid interior-exterior relationship. Thanks to these movable sheets, the interior space expands and the landscape penetrates the house, in a full fusion. The proximity to human contact requires the softness of the carpets or the soft touch of the silky fabrics of light curtains. Textiles, with their affability, humanize the atmosphere, bringing it closer to the user and transmitting something ineffable: the feeling of home. Finally, the smooth and abstract platforms of the cantilevers blend their chromaticism with the rest of the materials with a clear shade, dyed in ochre. 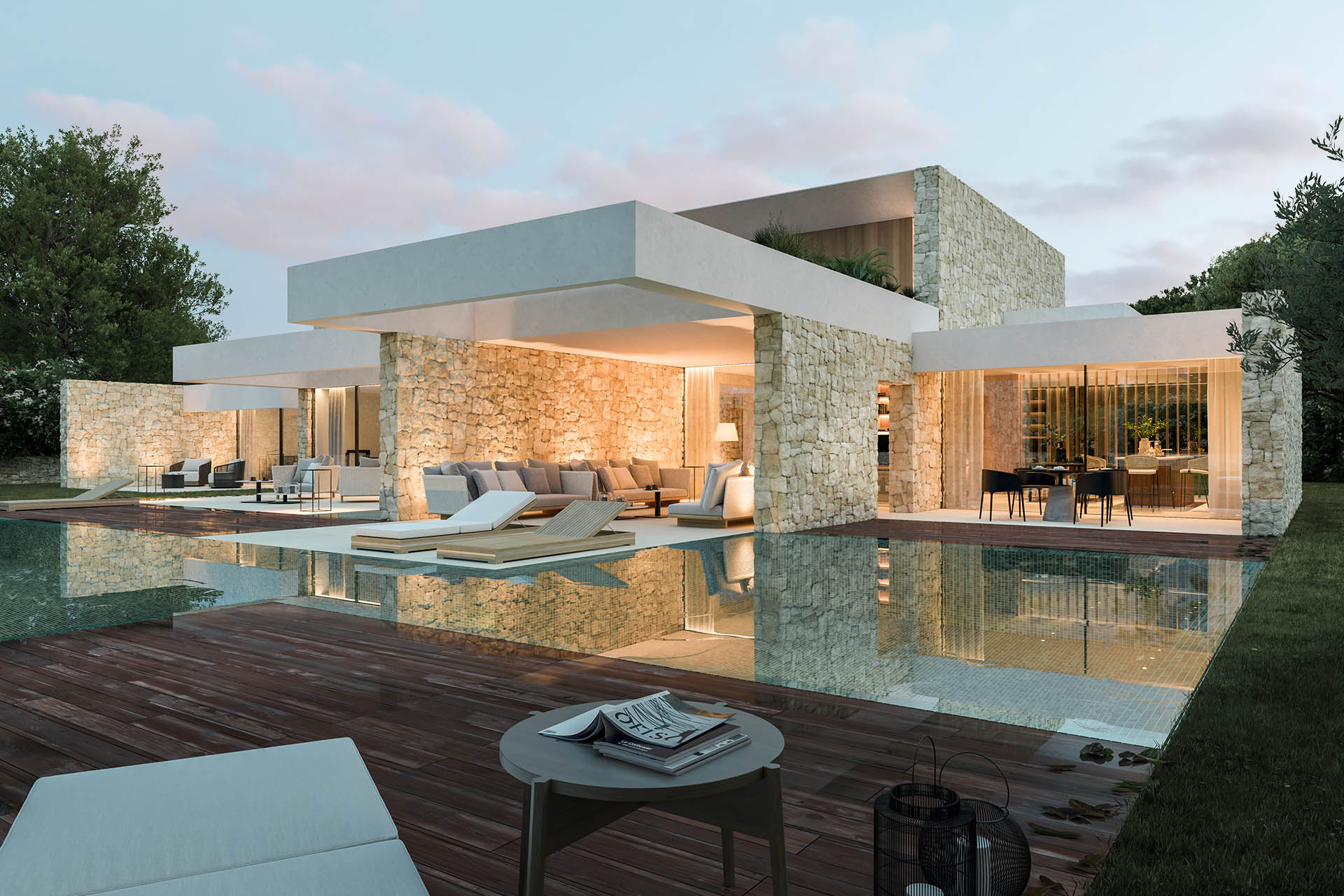 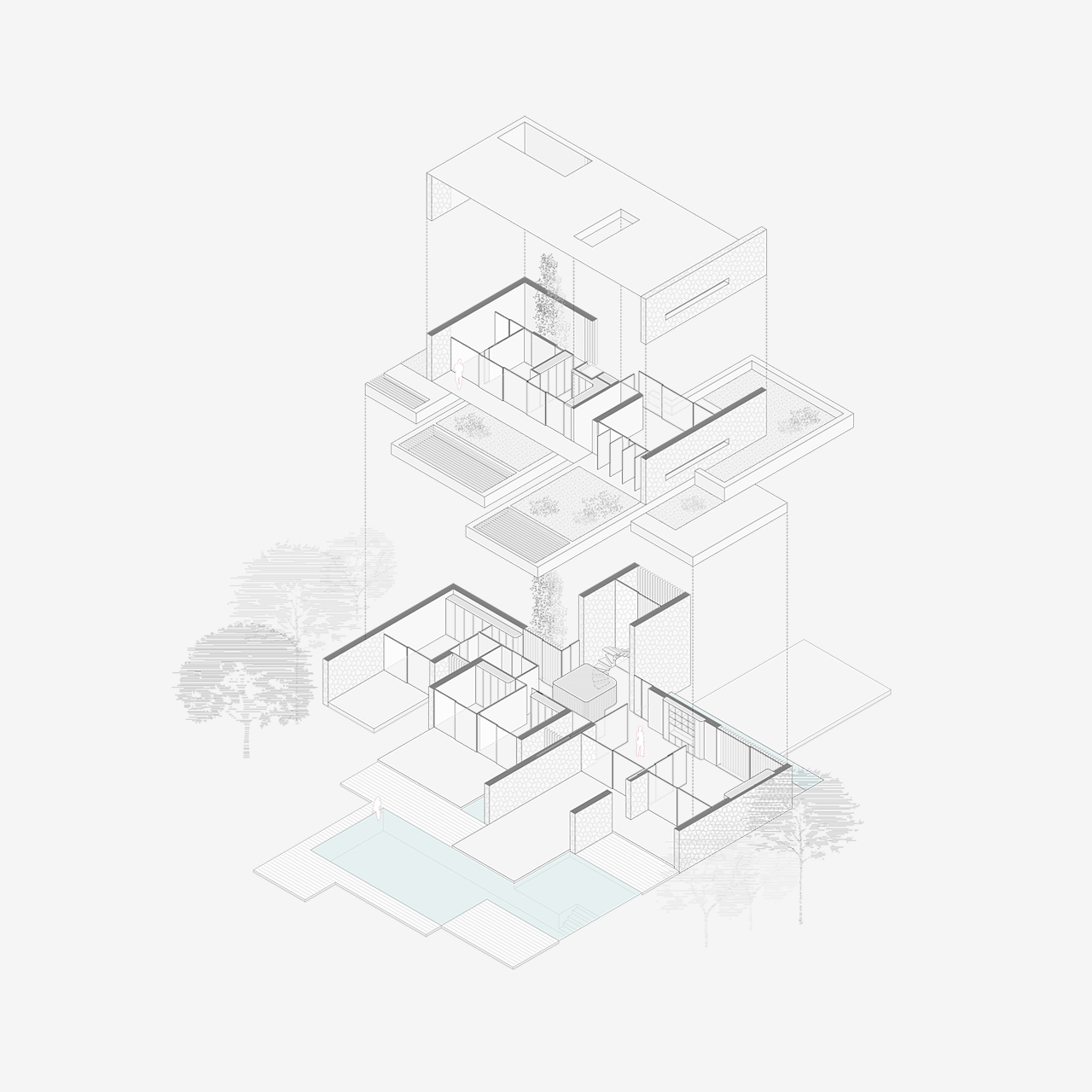 Evaporative cooling is achieved by increasing the amount of water vapor from the air that is introduced into the house when a moving water mass passes from the liquid to the gaseous state. In this process, the liquid absorbs energy from the air, which generates a reduction in the ambient temperature. These water surfaces must be located in the spaces prior to the entry of air into the building.

In this way, a small sheet of water, with its surface undulated by the effect of a fountain spout, is located to the north accompanying the visitor in his access to the house. Likewise, to the south, the large water surface of the pool adapts to the movements of the house, creating beach areas and swimming channels between terraced wooden spaces. 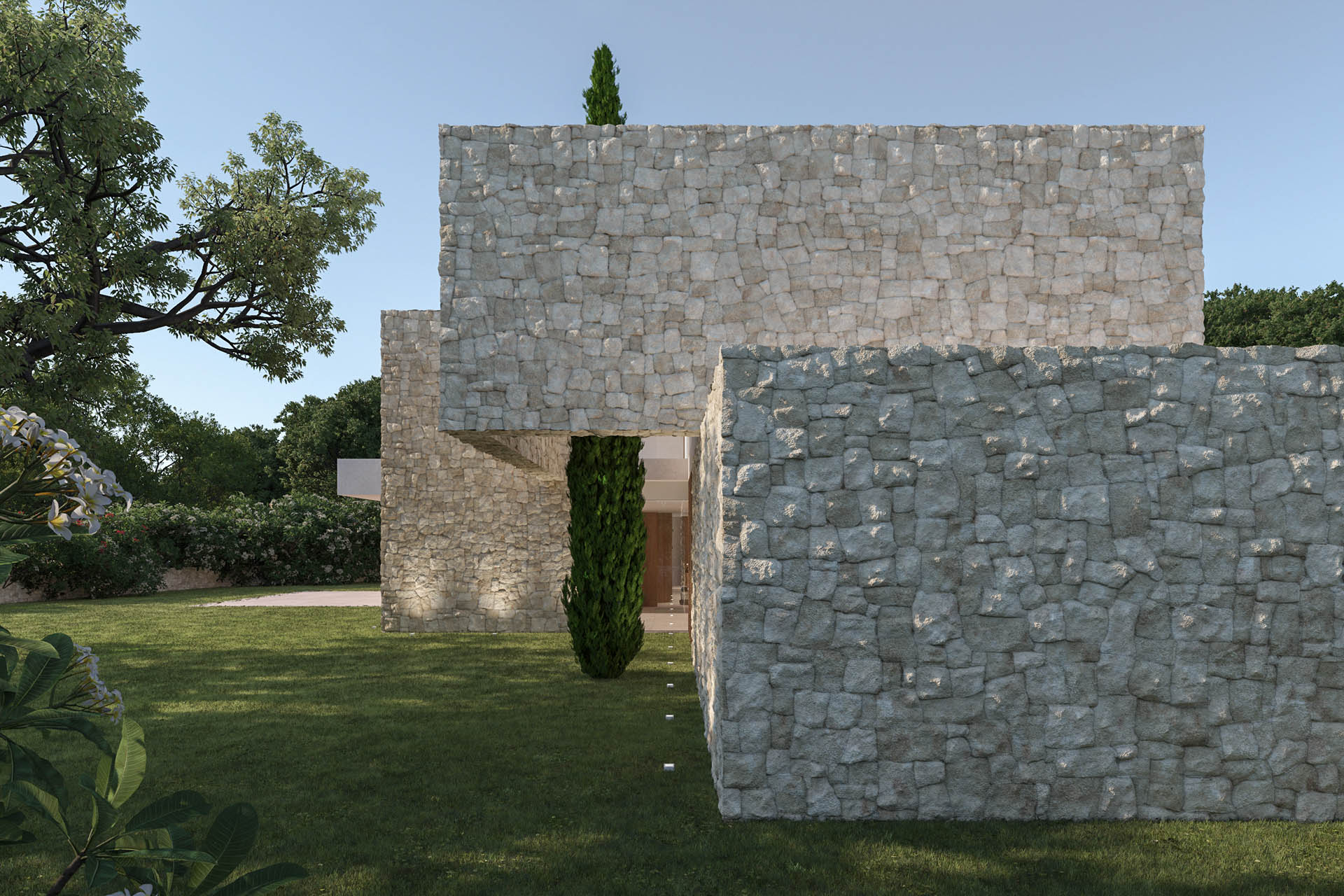 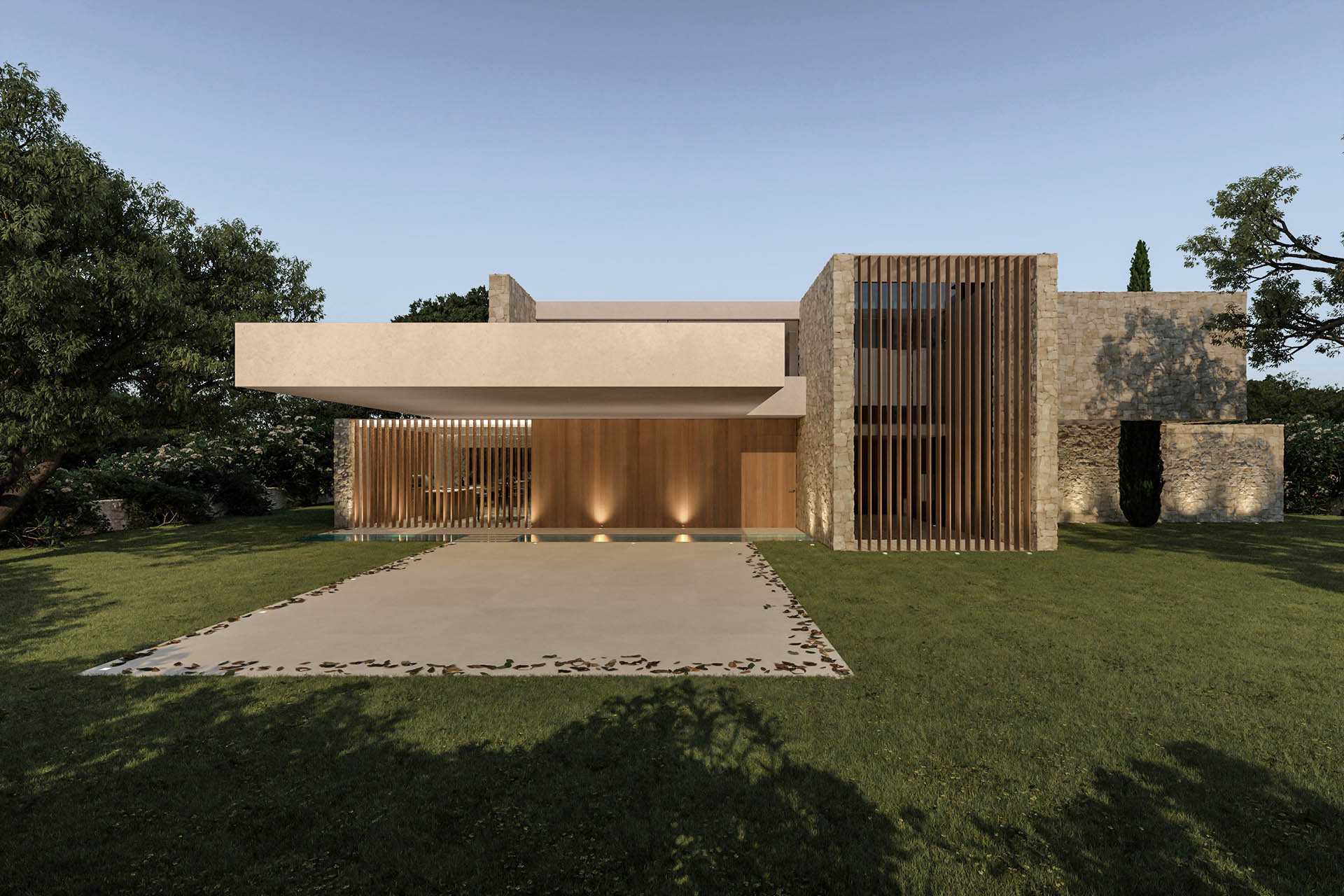 The use of vegetable covers is adopted because of lower heat absorption and higher thermal inertia. In addition to recovering the green space occupied by the footprint of the building, they manage to prevent the heat produced by the incidence of solar radiation on the roof from penetrating into the interior of the house. They also contribute to regulate the level of water evacuation. Rainwater will also be collected for reuse in irrigation. 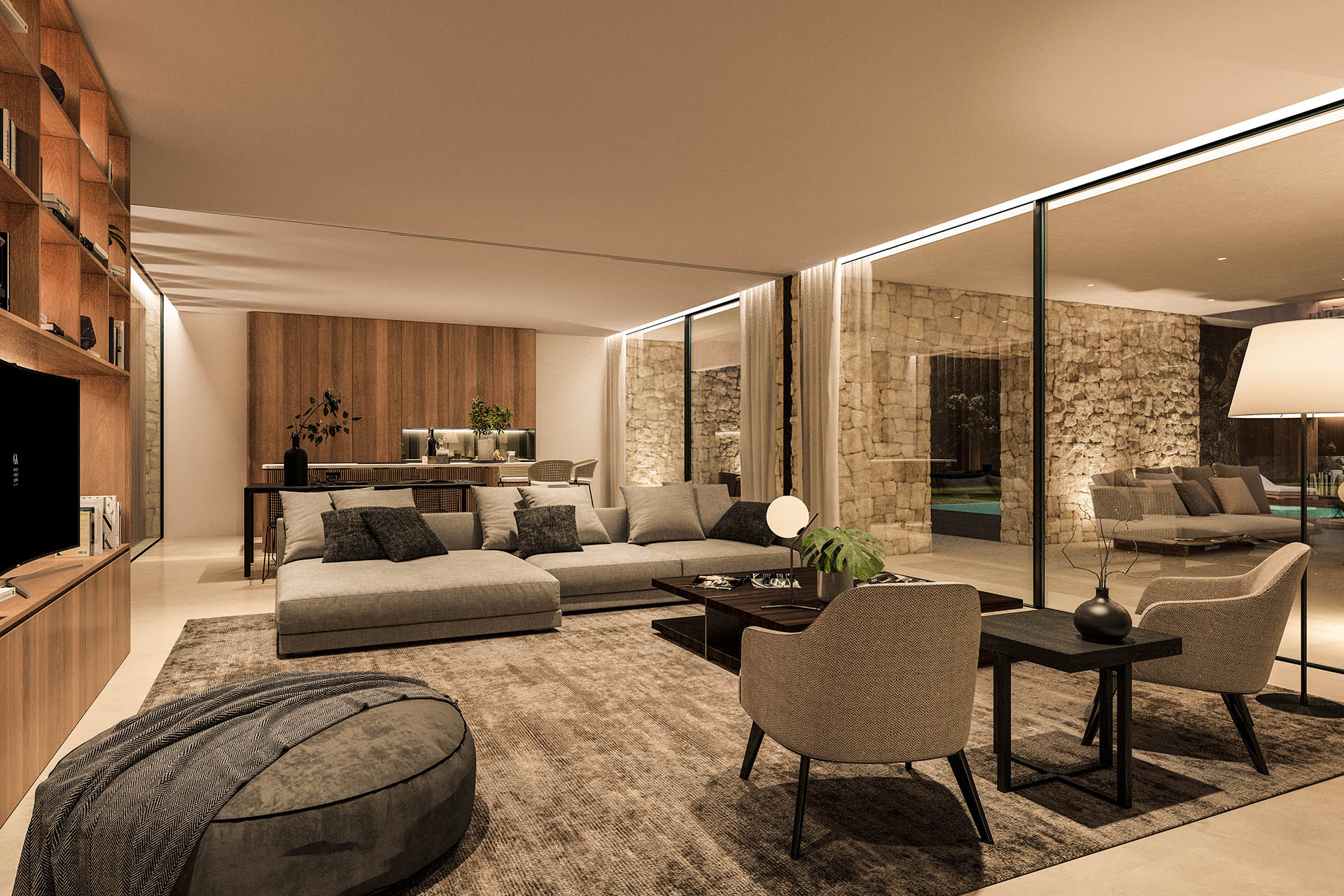