The architecture and the concept developed for this single-family house located on the beach of Alicante, was born from the search for an intimate and warm space to relax and enjoy. A unique project in which the different architectural elements form a whole under one of the main points of the house: the suspended wall.

This house located in Albufereta, Alicante, is characterized by the presence of an imposing architectural element that gives uniqueness to the project: a suspended wall that offers privacy to the home. The shelter offered by the wall, apparently endowed with weightlessness, levitates above the void allowing the interior and exterior to merge and blend. An architectural volume that offers generous diaphanous spaces in which different environments converge in which to enjoy the exterior of the house with exceptional privacy.

The proposal assumes as a premise the need to guarantee privacy inside a plot extraordinarily exposed to prying eyes. Contrary to the irregularity of the perimeter, the architectural response to this basic requirement crystallizes in a geometry of rounded volumes. A formal simplicity that through the physical delimitation is able to materialize the idea of the effective protective element of the interior enclosure.

The inhabited hollow that achieves a visual richness animated by the experimentation of space in all its complexity. An isolated and introverted interior landscape, which invites to enjoy the wide spaces from the calm and intimacy. 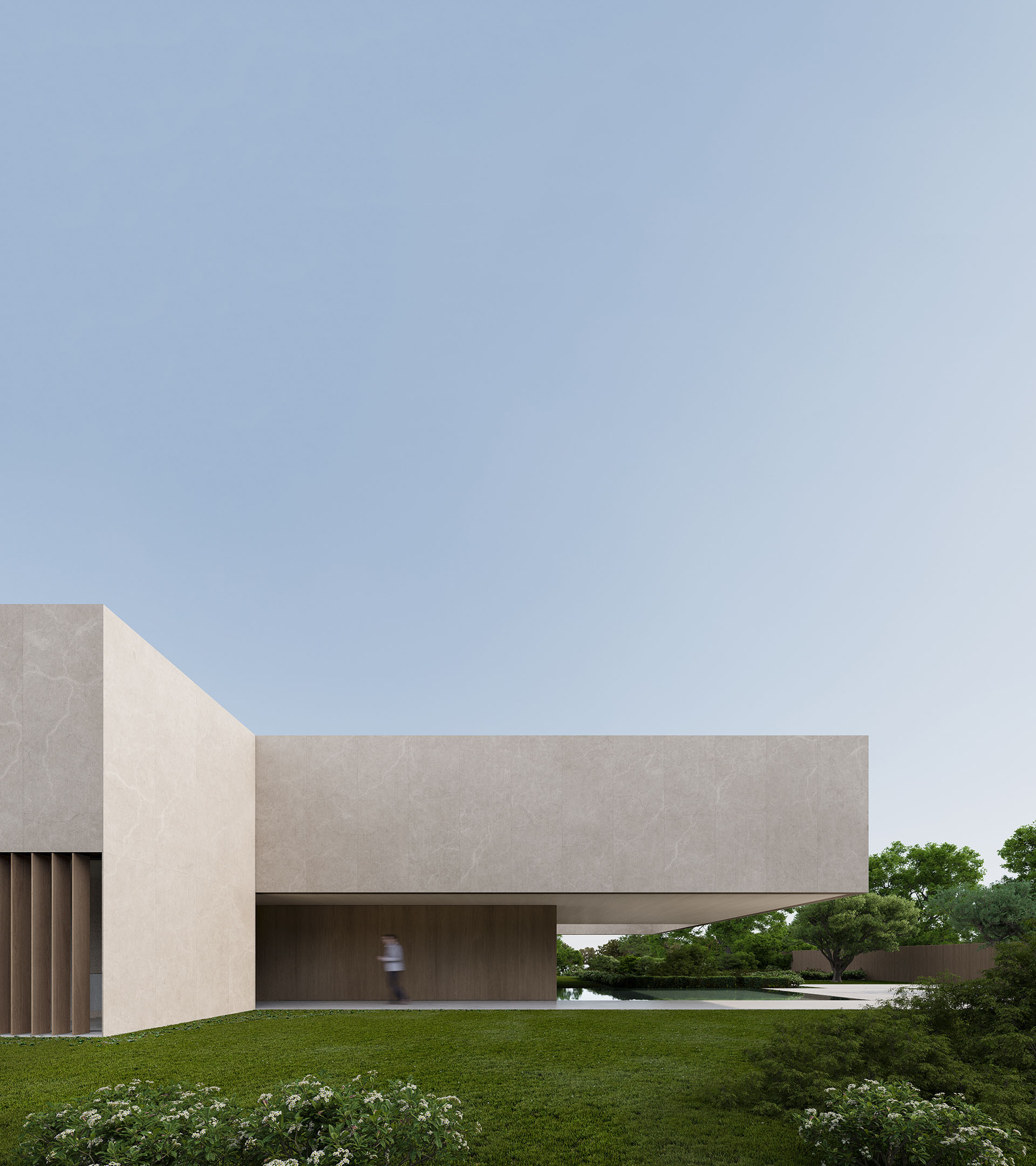 THE GAP IN THE WALL

The access points to the plot, both pedestrian and vehicular, are concentrated in the southwest corner. The architectural form must be able to generate a representative entrance to the building on a completely opaque elevation while guiding the access routes to the building at the northern end, freeing the southern area for private use.

A partial sliding of the rear volume produces a narrow fissure in the perimeter wall that shows the access point to the house. Accompanied by a sheet of water, the route from the access to the plot to the interior is thus intuitively signposted under the energetic cantilever that welcomes the visitor with its shade. 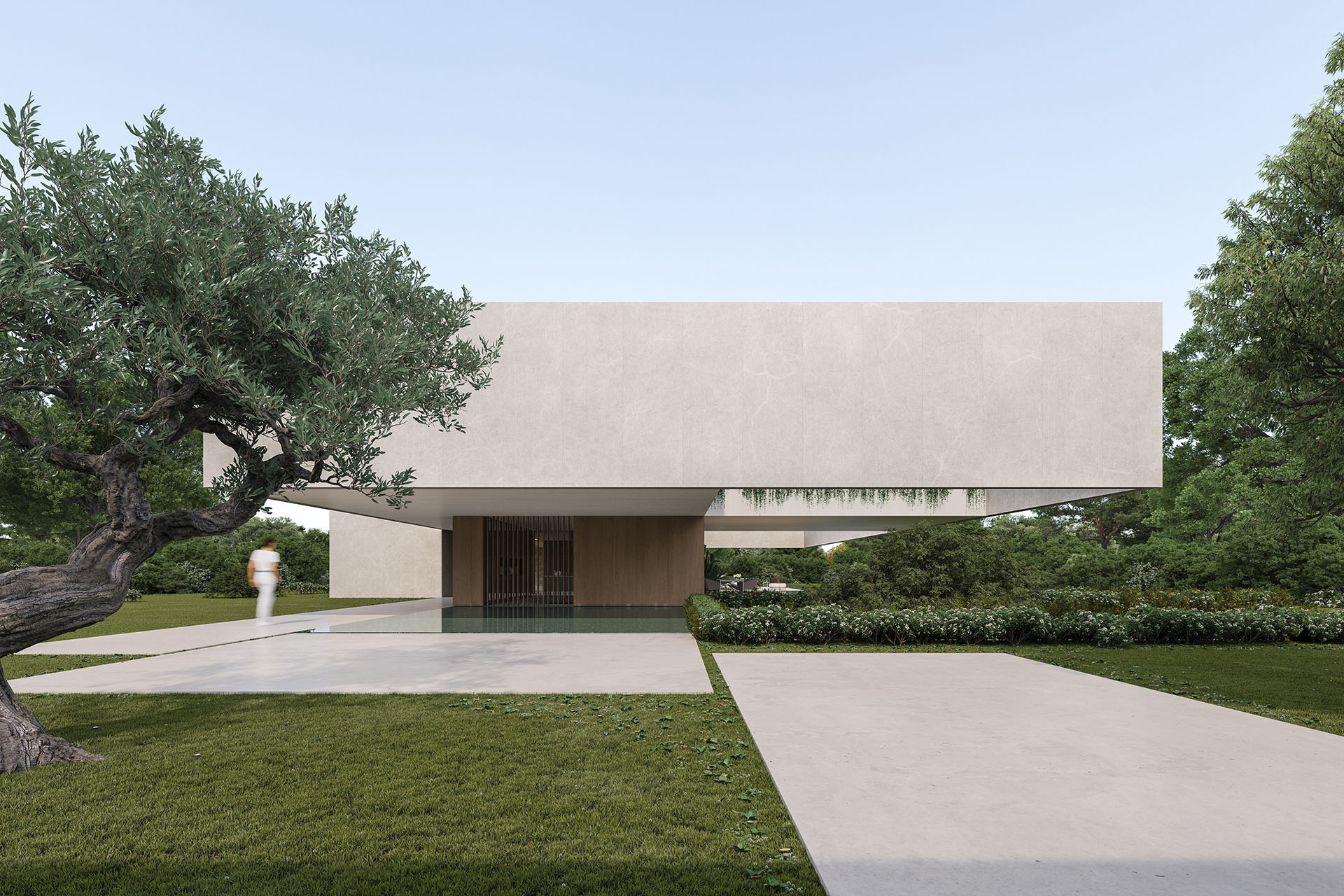 THE LANGUAGE OF MATERIALITY

The defensive will of the formal solution translates into large stone cladding that covers the solid prisms of the exterior volume. On the other hand, the welcoming intentionality of the spacious interiors is perceived in the grained texture of the wood that is printed, even on the surface of the concrete walls. The strong roughness of the masonry contrasts with the incorporeality of the large glass panels or the smooth surfaces of the metal plates, while the sheets of water and the plant element, arranged on different levels, characterize the exterior spaces, naturalizing the built work and blurring the boundaries with the garden space. 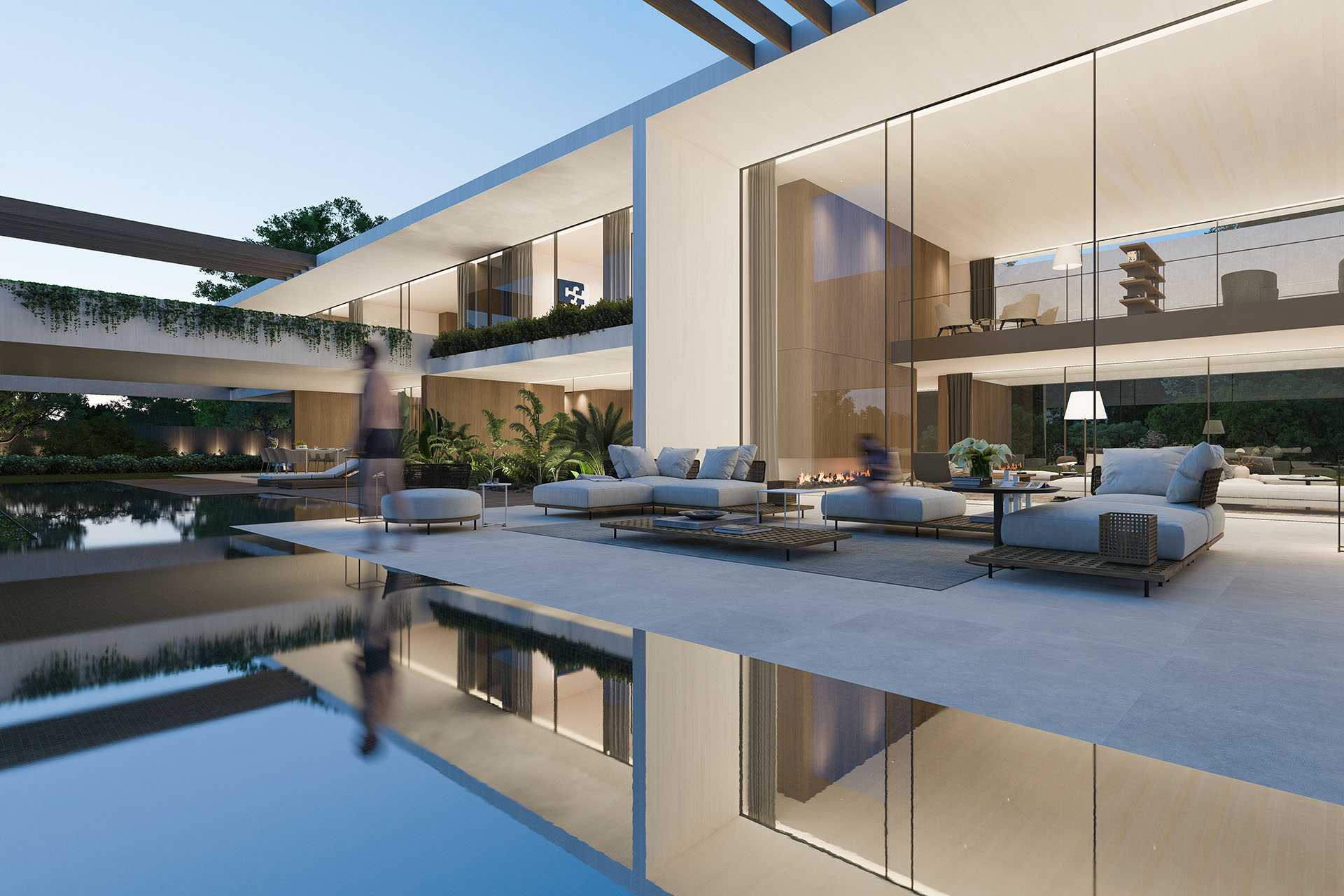 The plot, conveniently arranged along an east-west axis, enjoys a powerful southern elevation so the possibility of opening the spaces to the south seems unavoidable. The courtyard to the south is emerging as the appropriate means to combine interior spaces in an open relationship with the exterior while reinforcing the introverted character of the building. 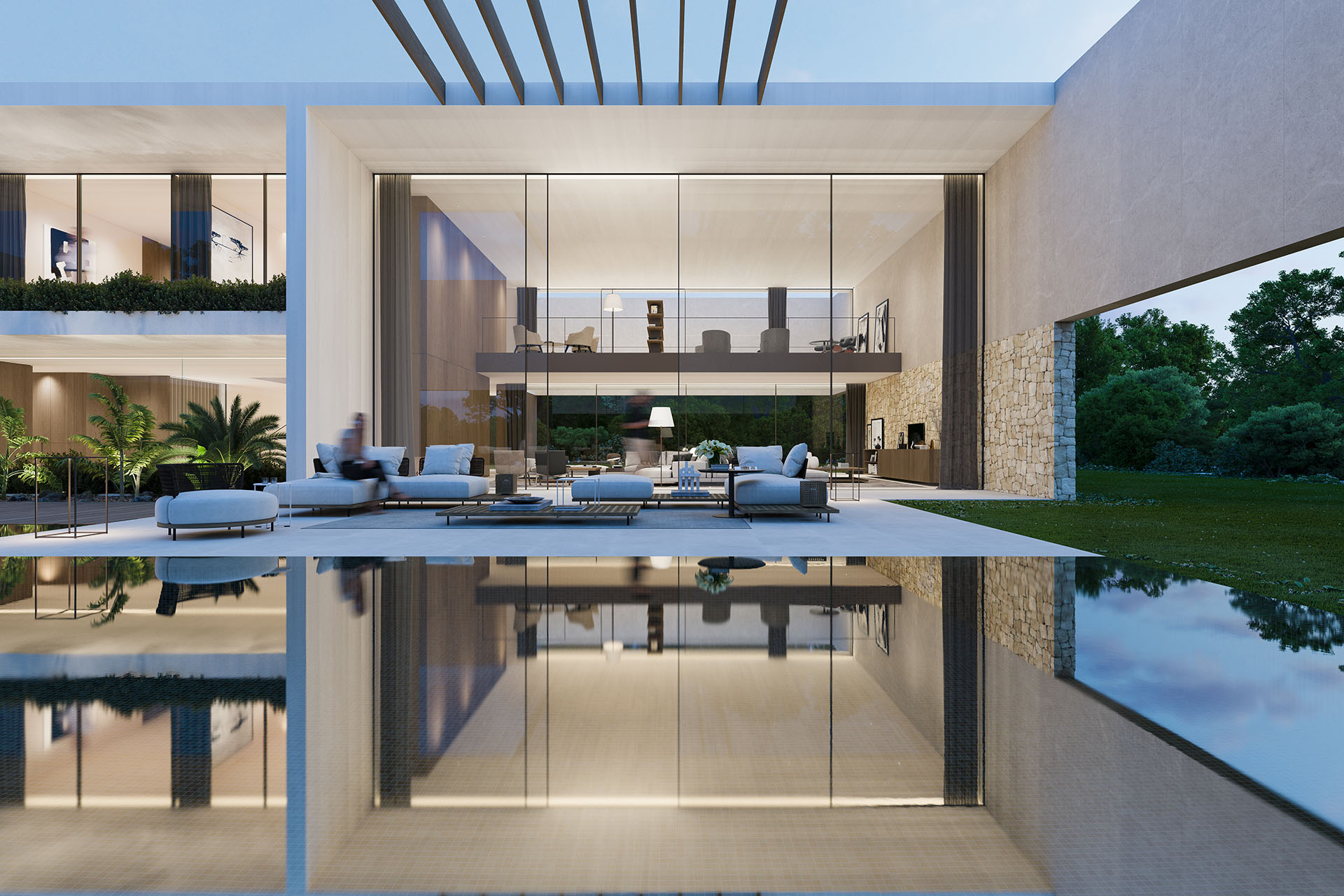 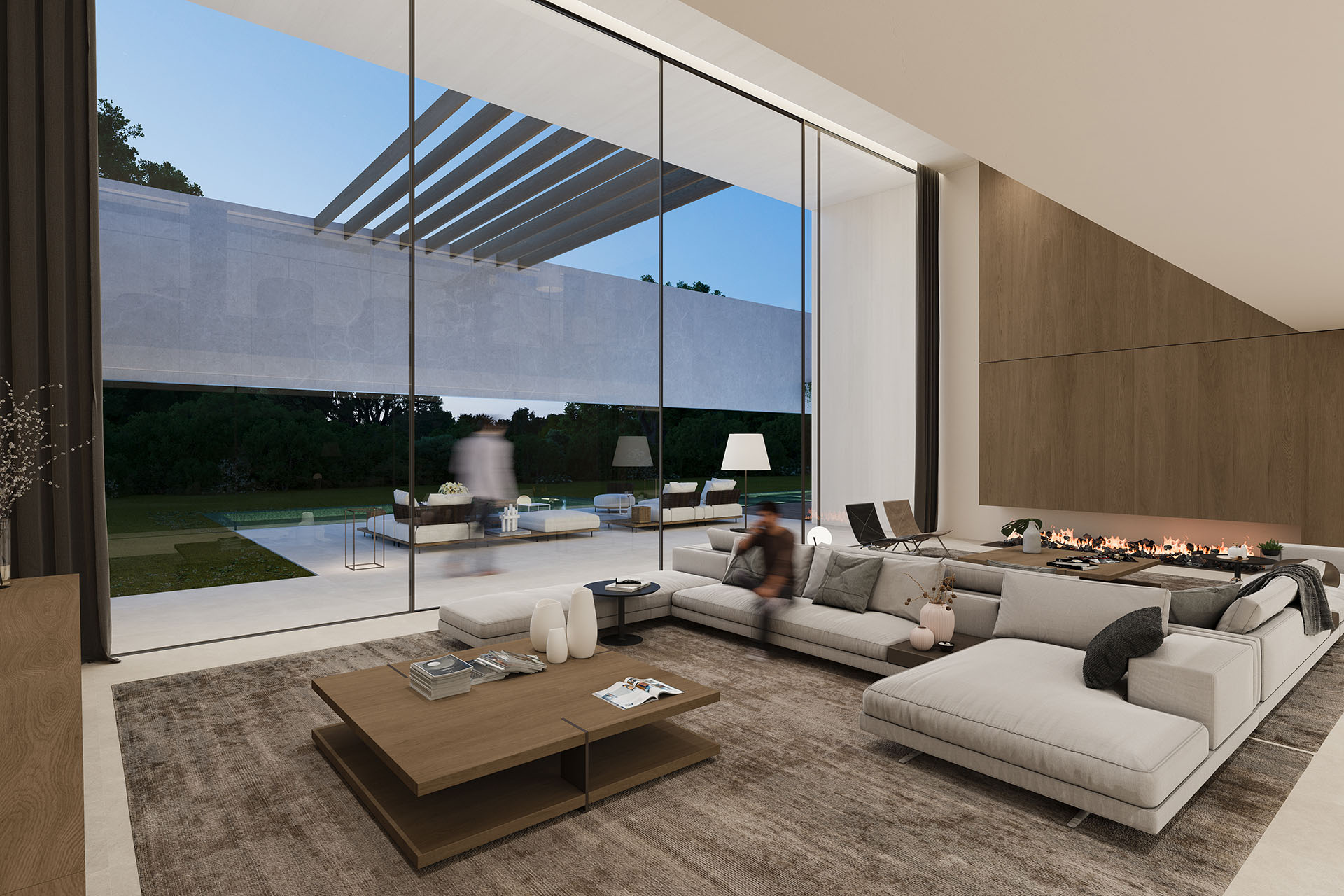 THE SHAPING OF THE INTERIOR LANDSCAPE

The perimeter wall rises, levitating above the void and allowing the landscaped environment to approach the interior of the house. This culminates the configuration of diffuse relations between the interior and the exterior, capable of bringing landscape quality to the architectural spaces.

This gesture, which separates the enclosure from the ground level, also offers the possibility of generating through spaces, open in opposite directions to facilitate the circulation of cross currents. 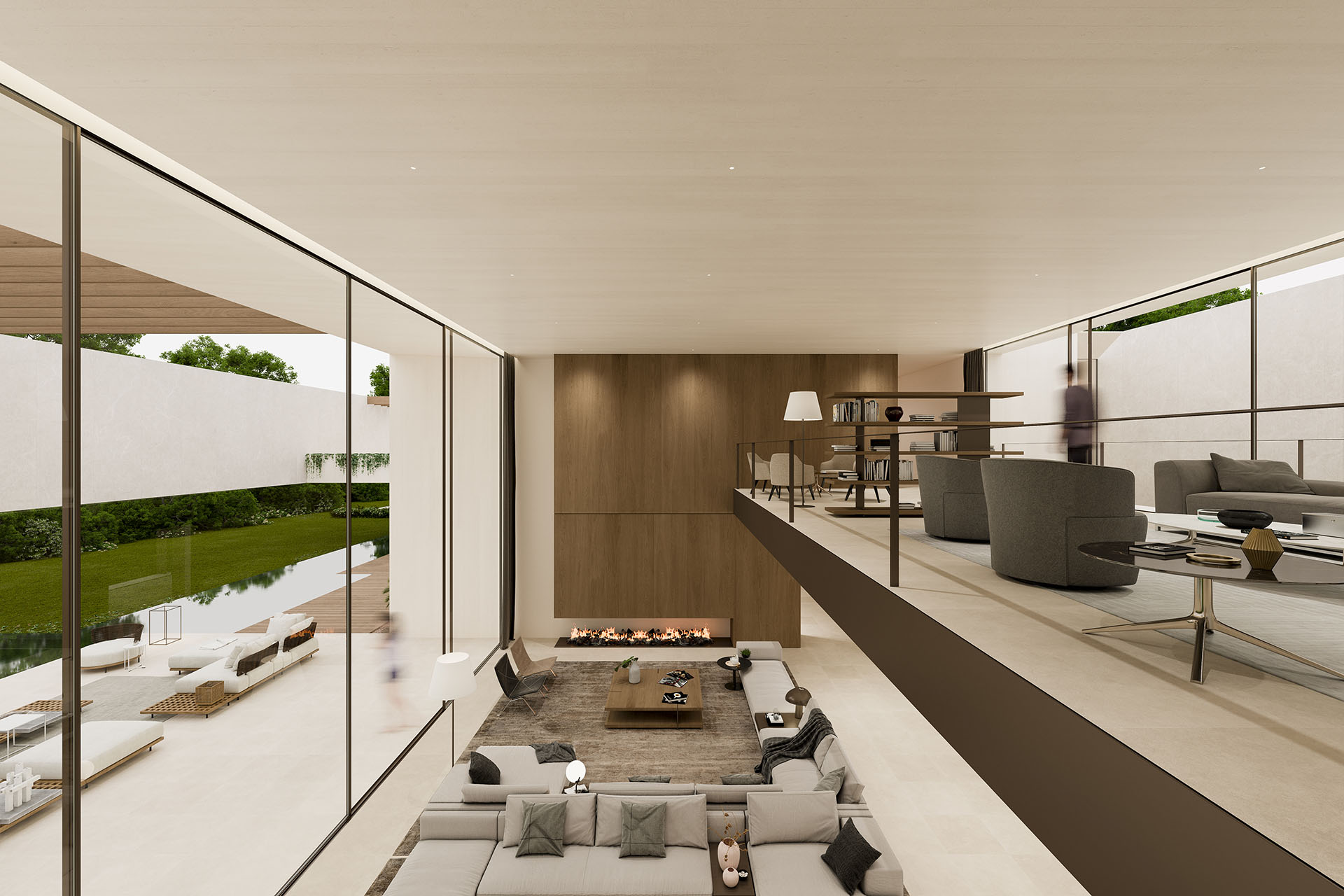 In addition to this large courtyard to the south, the massive interior volume is cut at different points to bring natural light to all levels of the house, introducing a play of light through landscaped courtyards. The visual richness is emphasized with the work in section, with the planes of the different levels sliding into each other at different heights and channeling the perspectives into diagonal fugues that maximize the spatial sensation.

These operations with the interior volume as the protagonist are further enhanced by the inclusion of double-height spaces that increase the indirect vision between areas at different heights, creating differentiated but visually interconnected environments. 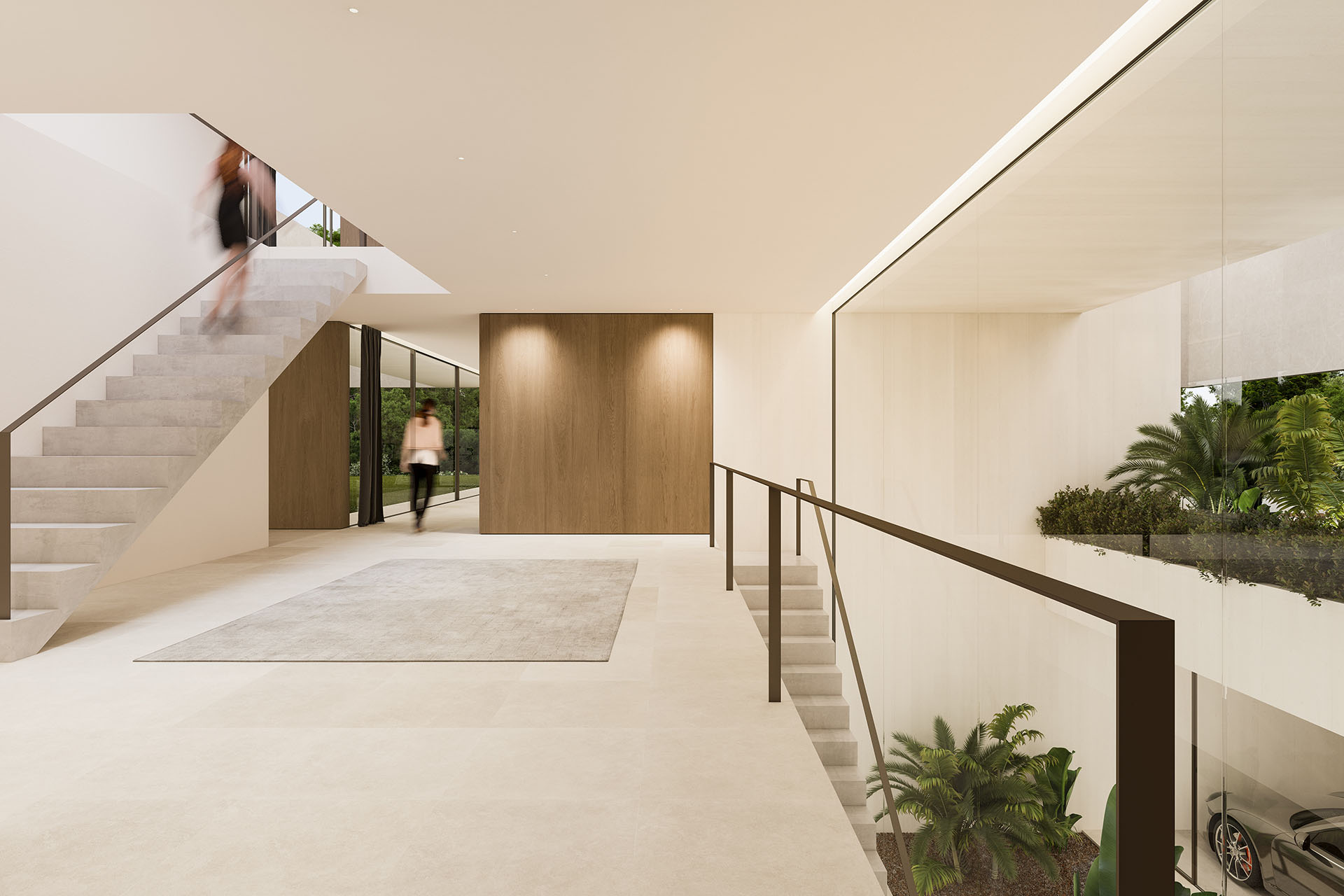 Inside, the circulations are centralized in a single distribution core that brings together the connections between all parts of the program and between all levels, rationalizing the relationships between zones and minimizing routes in an efficient manner. 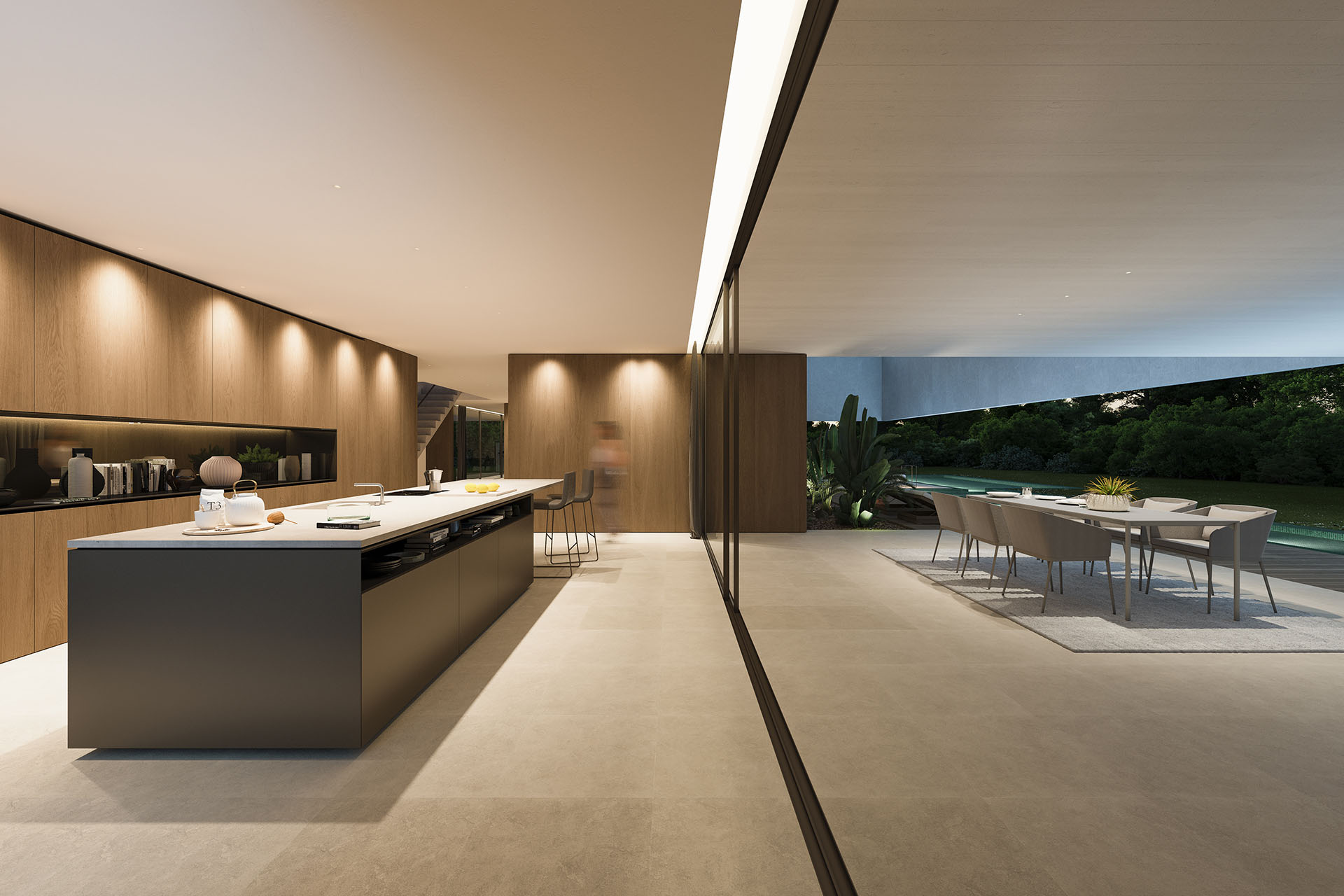 The sensation of intimate construction must be compatible with the creation of open spaces. The intramural volume is excavated and emptied, so that the resulting large cavity allows for maximum use, allowing for a free and fluid use of the space. 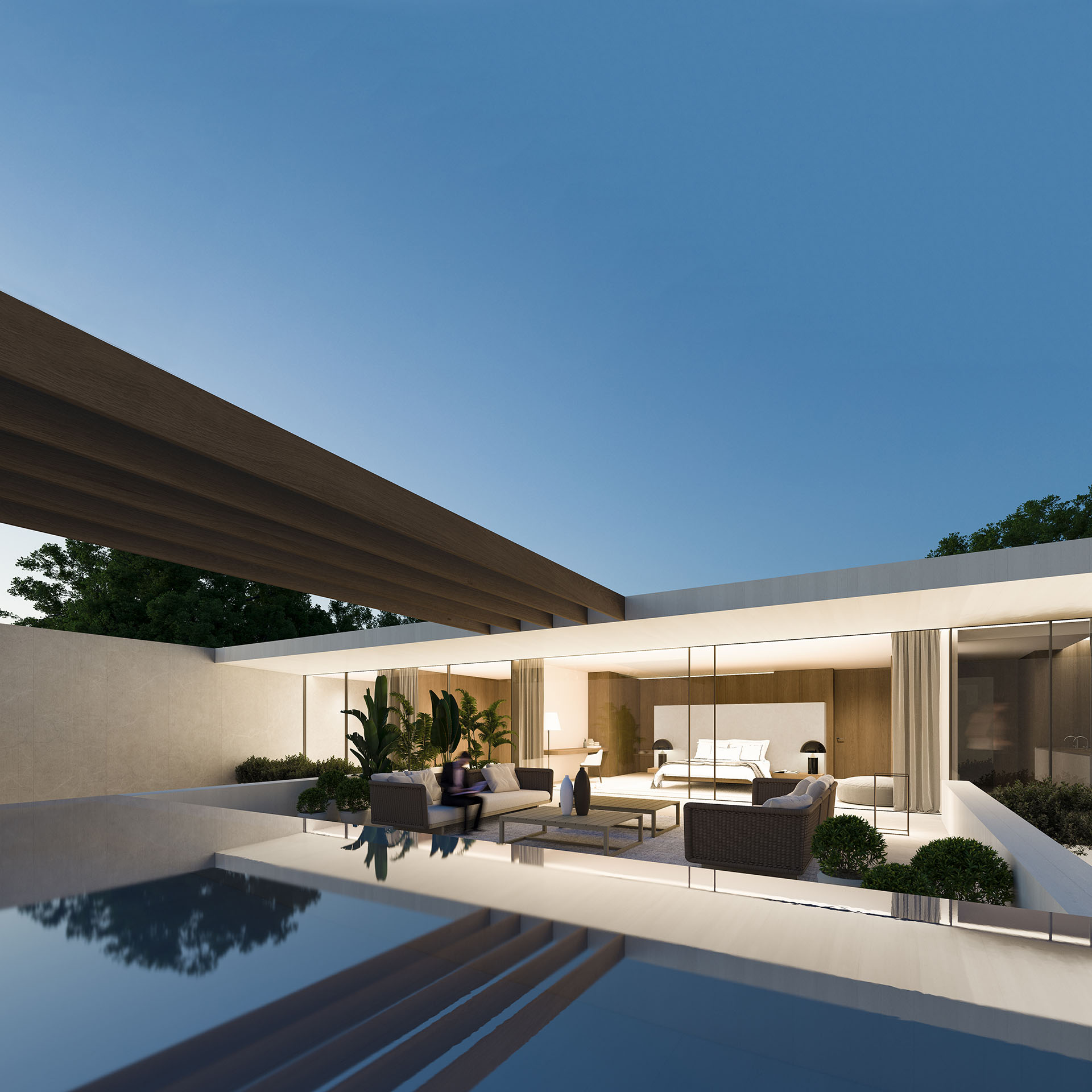 WELLS OF LIGHT AND REFLECTIONS

The boundary between architecture and landscaped surroundings is diluted in sheets of water that are fragmented and recomposed to consolidate a diffuse border that multiplies, with its specular reflection, the created landscape.

This dispersed boundary, with the presence of water and vegetation as protagonists, penetrates the earth until it also reaches the semi-basement level in the form of a generous courtyard that fills the buried rooms with light. The multiplicity of visual escapes and the depth of the perspective thus achieves an unusual, unexpected dimension. 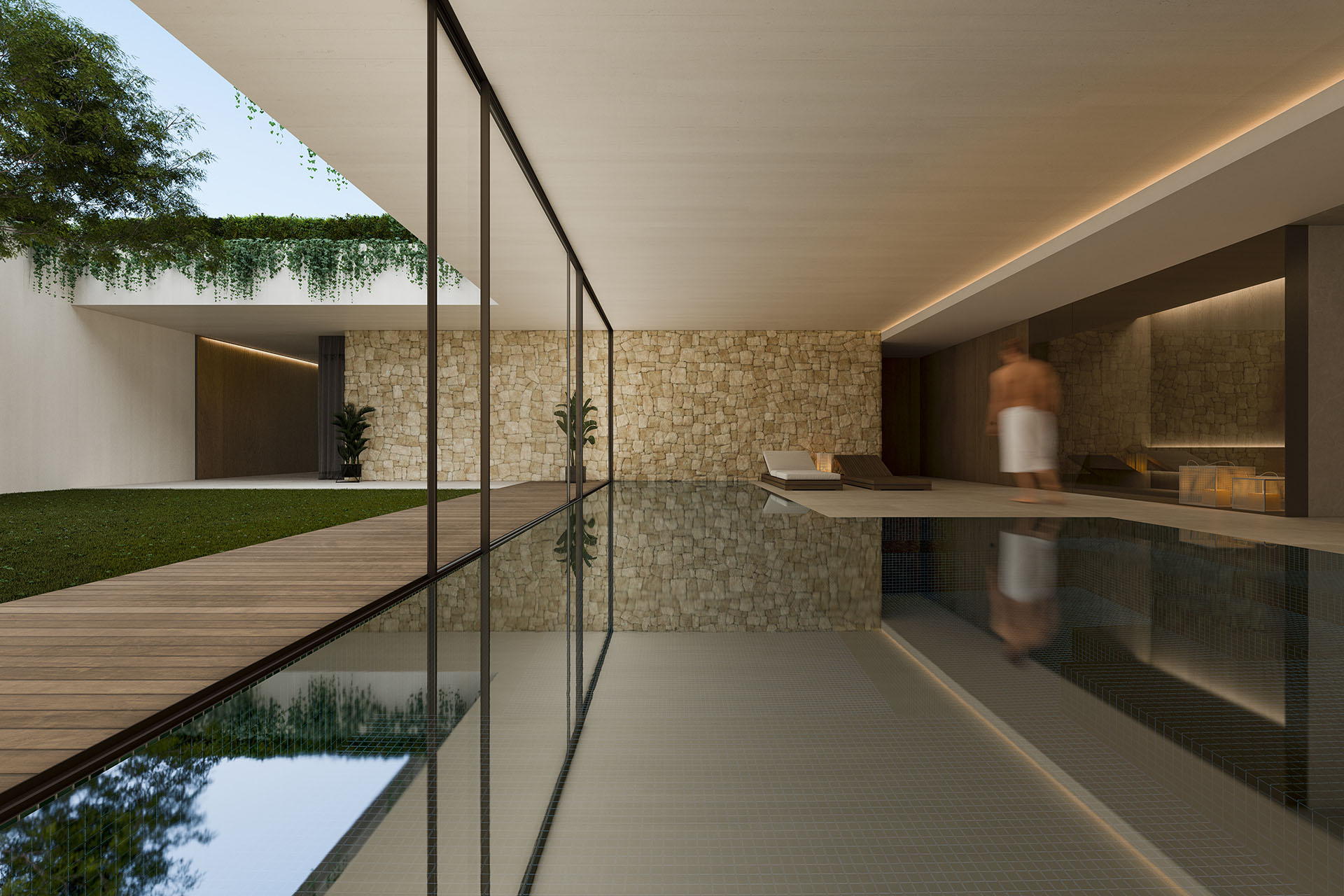 In contrast to the exterior image of the building, introverted and protective, the interior spaces are shown, uninhibited, in all their splendor, proudly exhibiting themselves as aesthetically attractive places and with special care in their design, including rooms that are usually hidden from view. Thus, rooms such as the wine cellar or the vehicle parking area are considered points of design opportunity, which, with the special visual characteristics of their fittings and equipment, give prestige to the domestic complex. 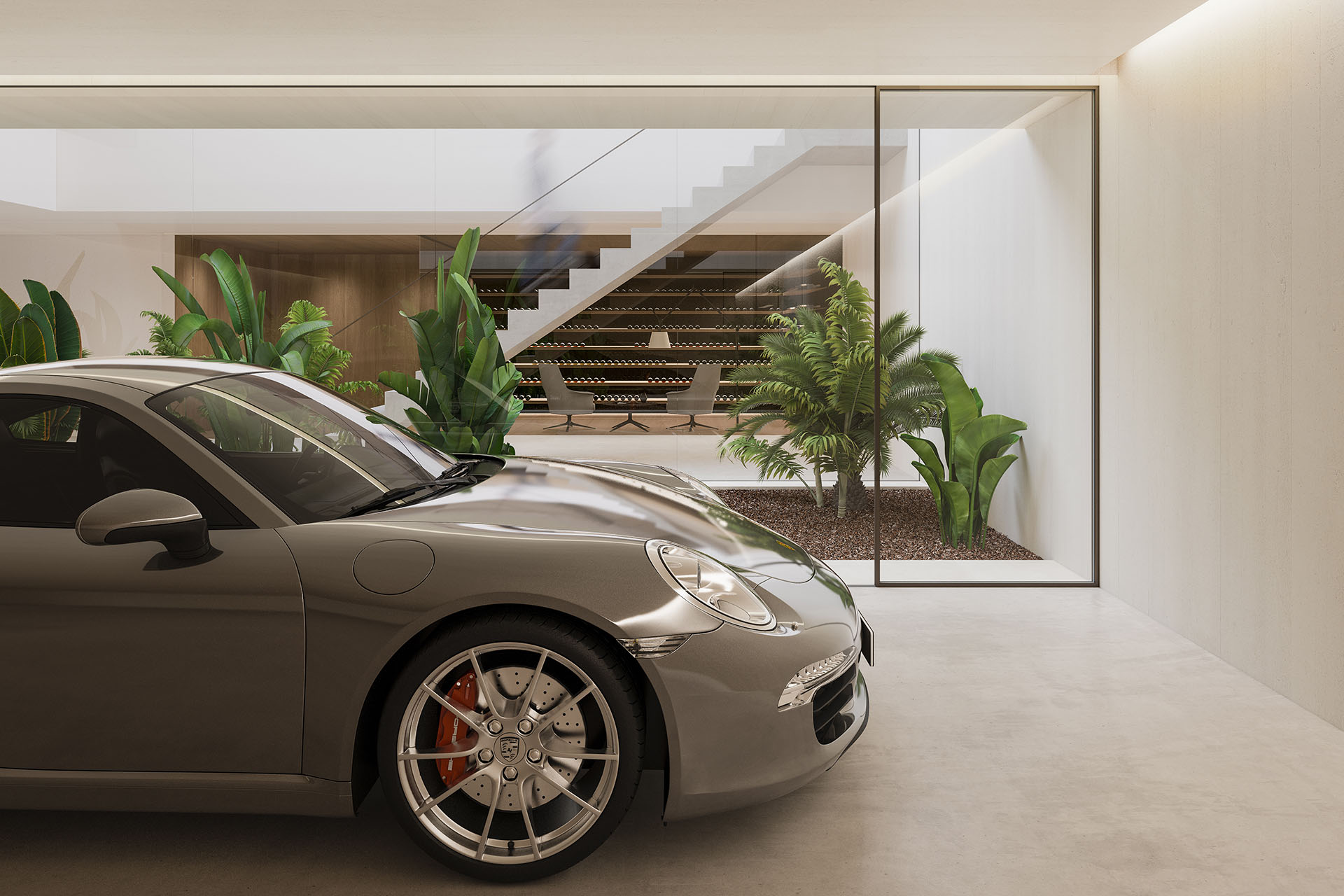