Gravitating over the different independent atmospheres of the house, between masonry walls and wooden panels, the abstract and light plane of the roof extends, protecting with its shadow all the open spaces that are unified in the synthetic image that only a regular geometry is capable of achieving.

Perforated by courtyards and crossed by the rhythmic tears of the pergolas, the continuity of the plane is animated by the opening of open spaces, while the capricious play of the light that slips through the slats casts dynamic shadows in step with the movement of the sun.

THE OBJECT ON TOPOGRAPHY

The determination of the height of the implantation in an intermediate position is decisive for a project that seeks a delicate relationship between the built platform and the ground level. Subtle topographical movements will ultimately accommodate the architectural piece in the terrain on which it stands, also configuring a slow descending route from the access to the public road to the shaded privacy of the interior garden. 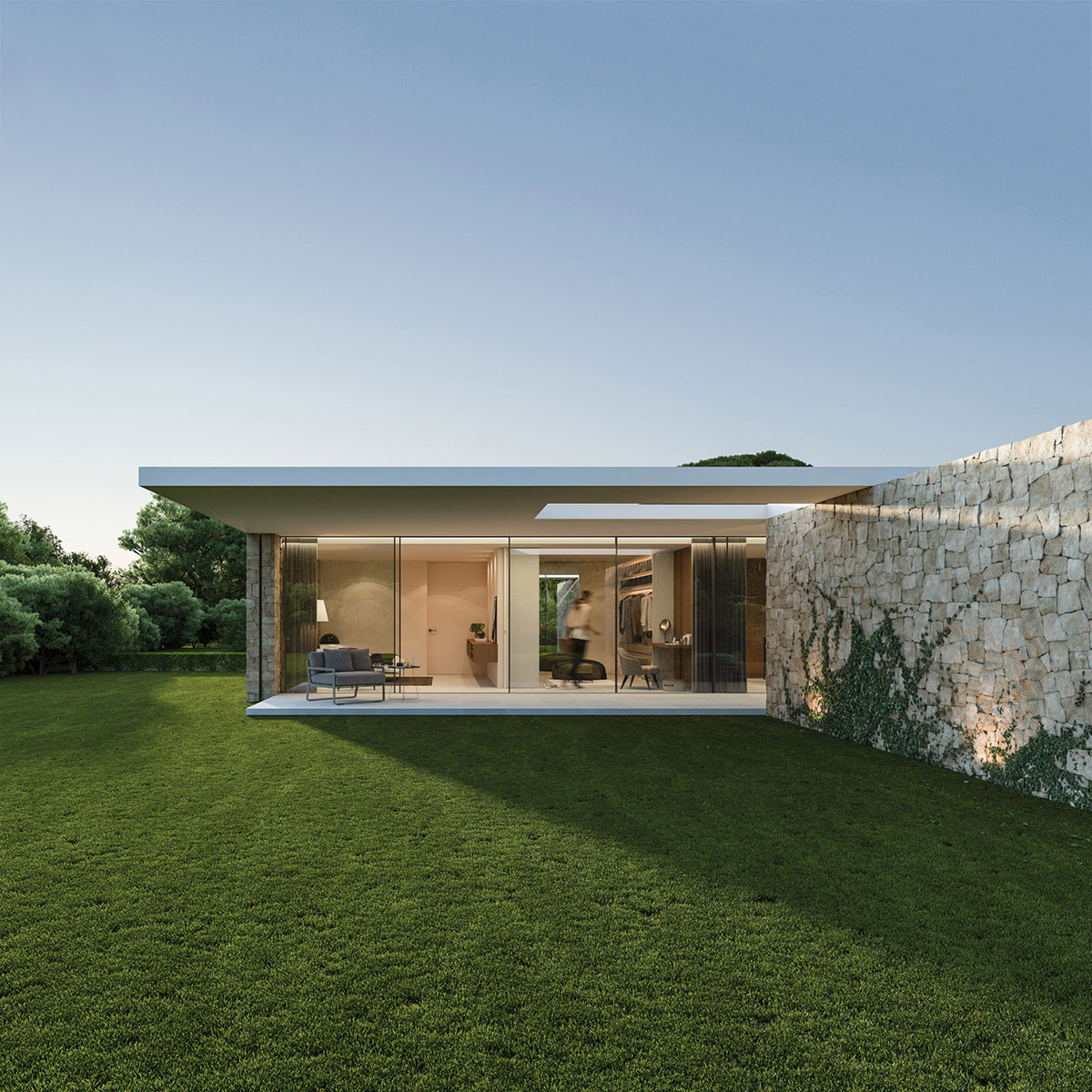 The leafy pre-existing trees that take root in the southern part of the plot form the perfect backdrop for the perspective, guaranteeing – with their dense foliage – the intimacy of the open spaces they delimit. In this way, it is the conditions of the plot itself that forge the character of the different landscaped areas, with a more public and elevated northern zone, in connection with the street, and a green and private southern zone.

THE UNIFYING PLAN AND THE SINGLE FLOOR PLAN

Opening up to the intense light from the south, the architectural volume is defined by the latent spatial tension between two light planes, the slender floor slabs and the roof. Under the ethereal abstraction of the thin white plane of the roof, the different living spaces of the house are grouped together, as well as the exterior spaces attached to the use of the dwelling.

The project inherits its proportions from the dimensions of the plot itself, which, close to the geometry of the square, transfer its characteristics to the built volume. With the only possible accesses aligned on the north face, the slight but by no means negligible topographical unevenness that occurs in a southerly direction contributes to orienting the interior spaces towards the south, with the construction situated on a level of visual dominance over the rest of the plot.

Through the transition spaces, an architectural route is established to approach the dwelling that, from the access to the plot and in a descending direction, crosses semi-shaded spaces and courtyards set against the sky, accompanied by sheets of water and masses of vegetation, until it reaches the interior of the domestic space.

In this way, landscaped areas are generated under the roof as a transition between the interior and the exterior; courtyards like oases around which the interior life of the house revolves and whose slender trees emerge from the built volume through the openings in the roof. In the covered garden spaces that appear to qualify the external perimeter of the construction, the roof is dematerialised, adopting the permeable appearance of pergolas of fine metallic slats that permit new nuances in the transition between the purely interior spaces and the open-air garden. 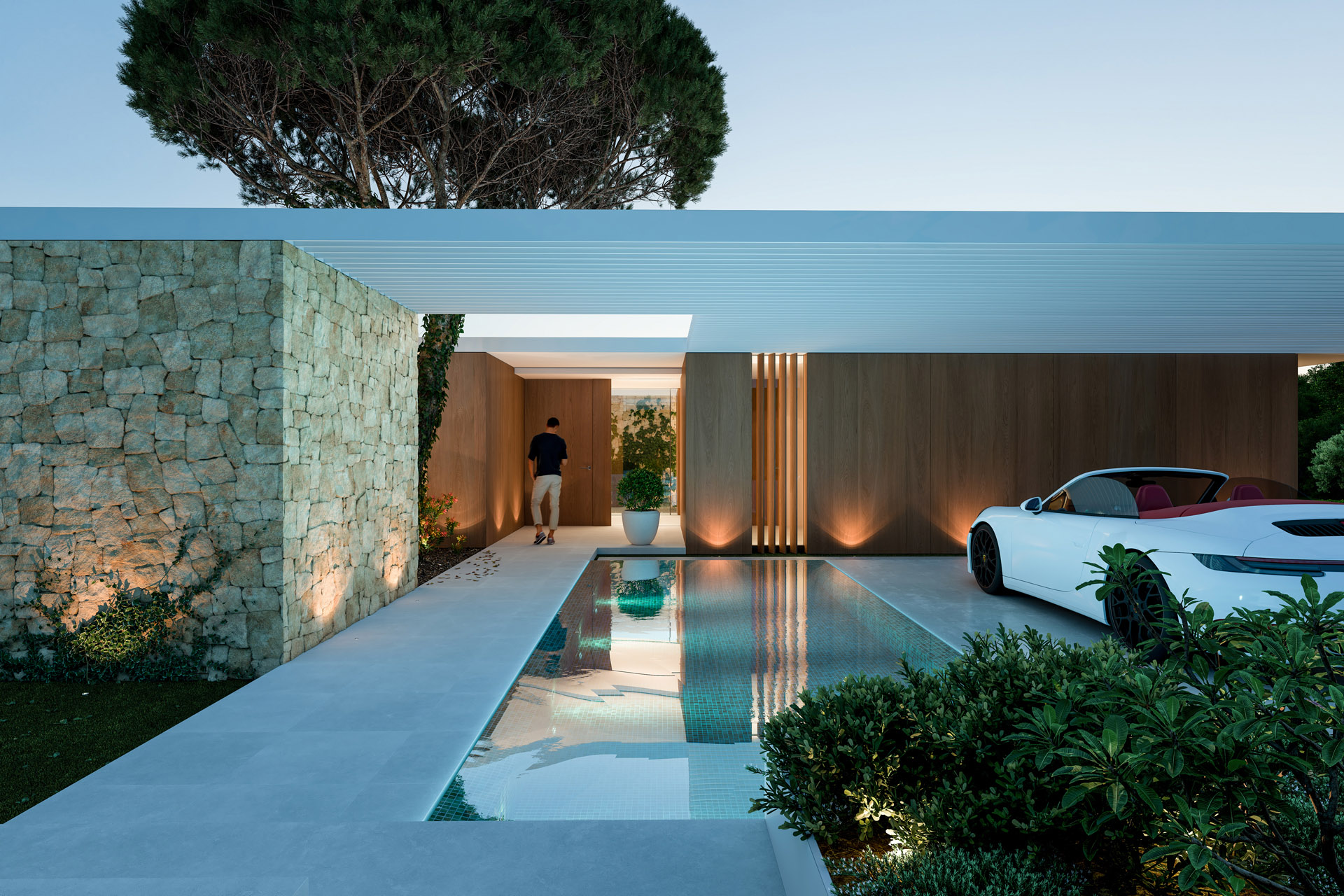 The movement of the relative sliding between the lower and upper planes is joined by other formal games that add richness and variability to the strict geometry of the square. The homogeneity of the plan is thus interrupted by the opening of interior courtyards, cutting into the smooth surface and allowing natural light to penetrate the interiors. However, the footprint of the building will remain faithful to the geometric purity of the initial idea, preserving its forceful perimeter intact.

TERRACES IN EVERY DIRECTION

The final configuration of the layout, together with the formal design decisions, ultimately crystallise in a solution characterised by the location of terraces in all directions, expanding the limits of the architecture itself towards the domesticated landscape that surrounds it. This mechanism ensures the double orientation of the rooms, which is necessary to achieve the bioclimatically efficient resource of cross ventilation. The poetic materialisation of an intrinsically Mediterranean lifestyle. 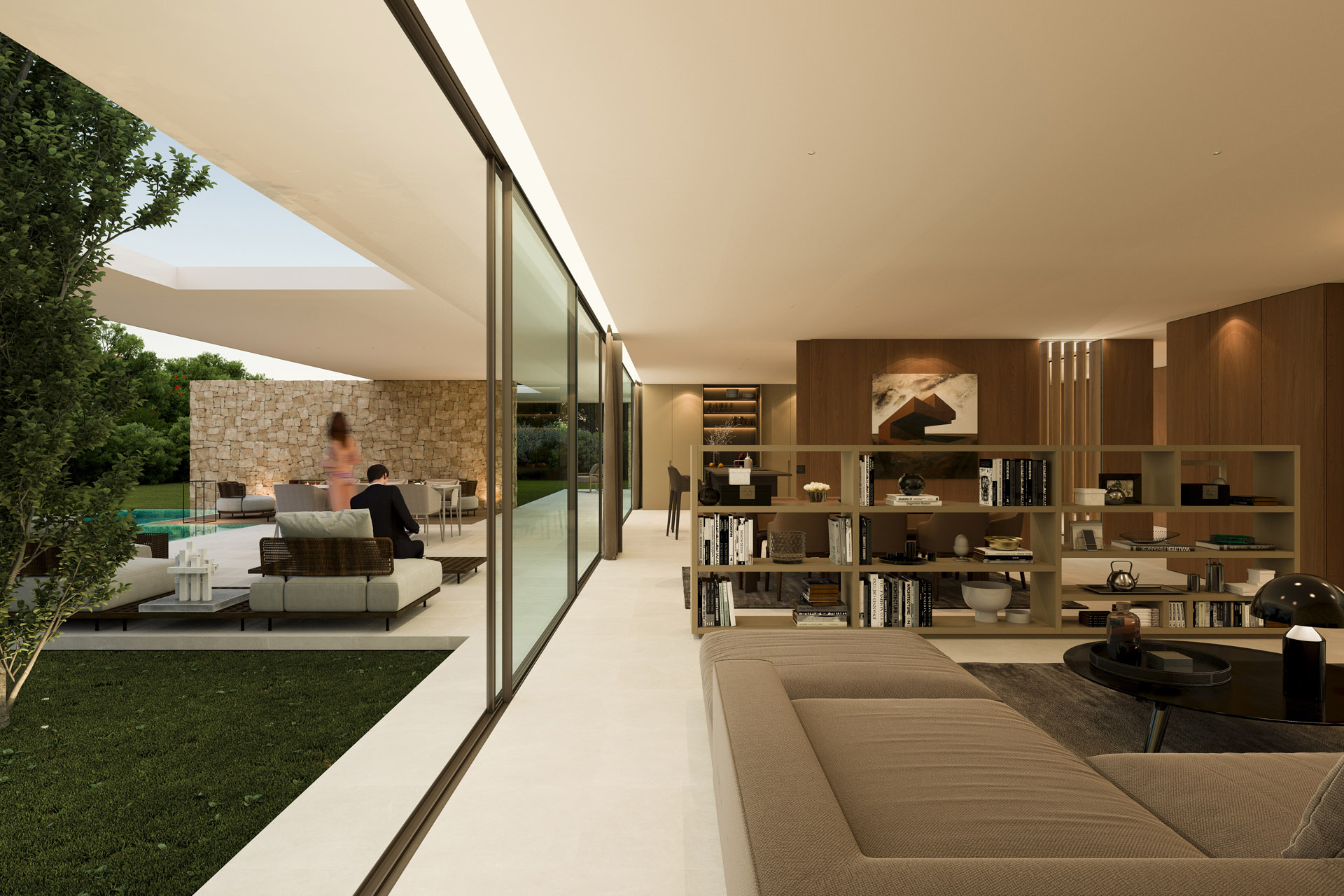 The day area appears to open to the south towards the wide views of the garden, with the silhouette of the trees silhouetted behind the generous terrace that is defragmented between the green tapestry of vegetation and the diffuse reflection of the sheets of water. Inside, the spaces are concatenated in a controlled interdependence, allowing both crossed visuals through deep diagonals and the autonomous use of the pieces.

In this way, the kitchen, although open and in close relation to the living and sitting rooms, allows its complete compartmentalisation through mobile panels concealed in the partitioning. Similarly, the study area allows for integrated use with the rest of the spaces, as well as independent use depending on the specific circumstances. 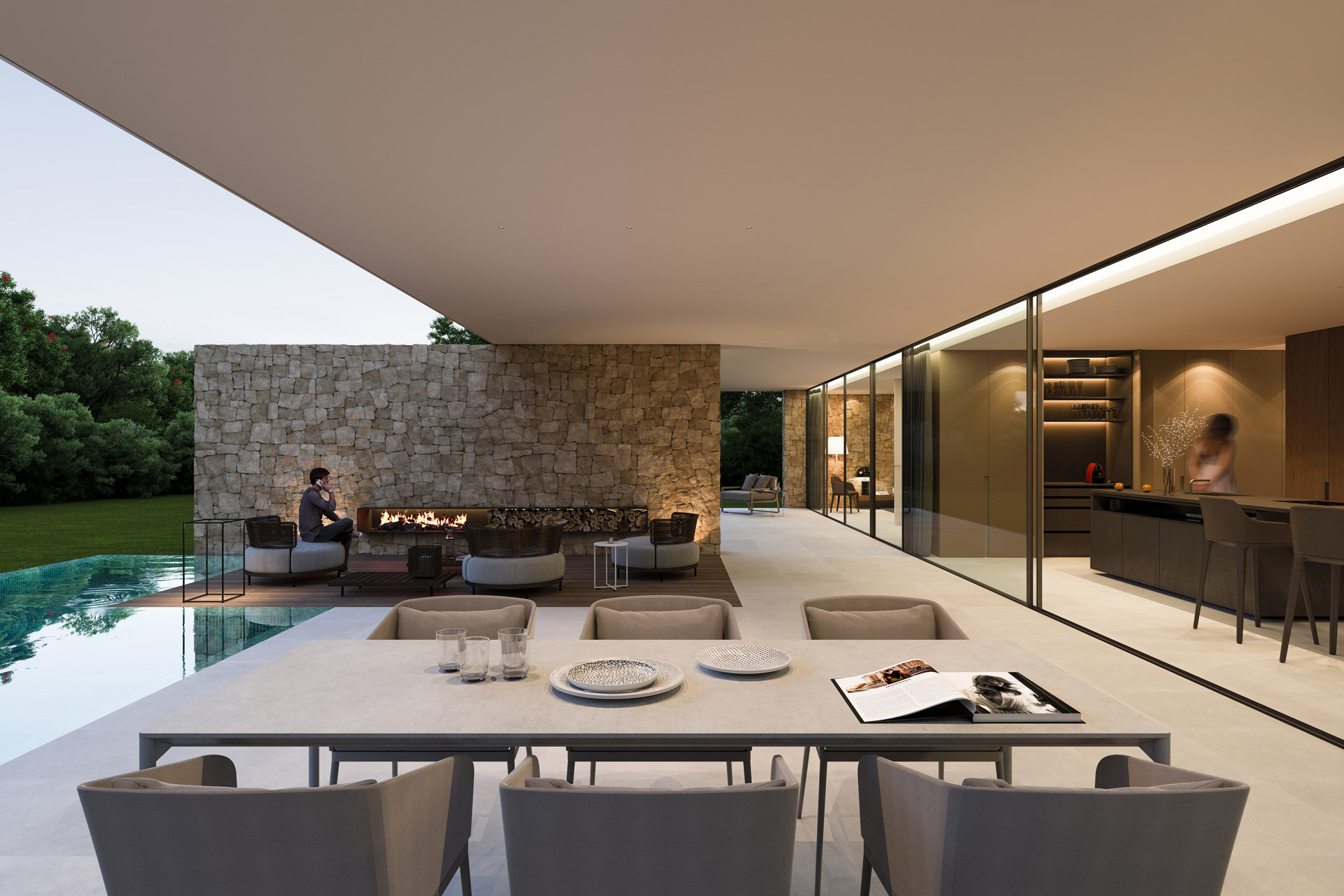 The warmth of materiality

In radical contrast to the snowy smoothness of the roof plane and the transparent glass enclosures that slide in large panels around the perimeter, the walls and vertical walls are endowed with marked textures that break into the living spaces, characterising them with their noble attributes. Masonry walls that, with the traditional stone locking, seek privacy between the open spaces. Veined wood panelling impregnates the rooms with warmth. A harmonious dance of surfaces that unfolds between the continuous planes of the floor and the roof. 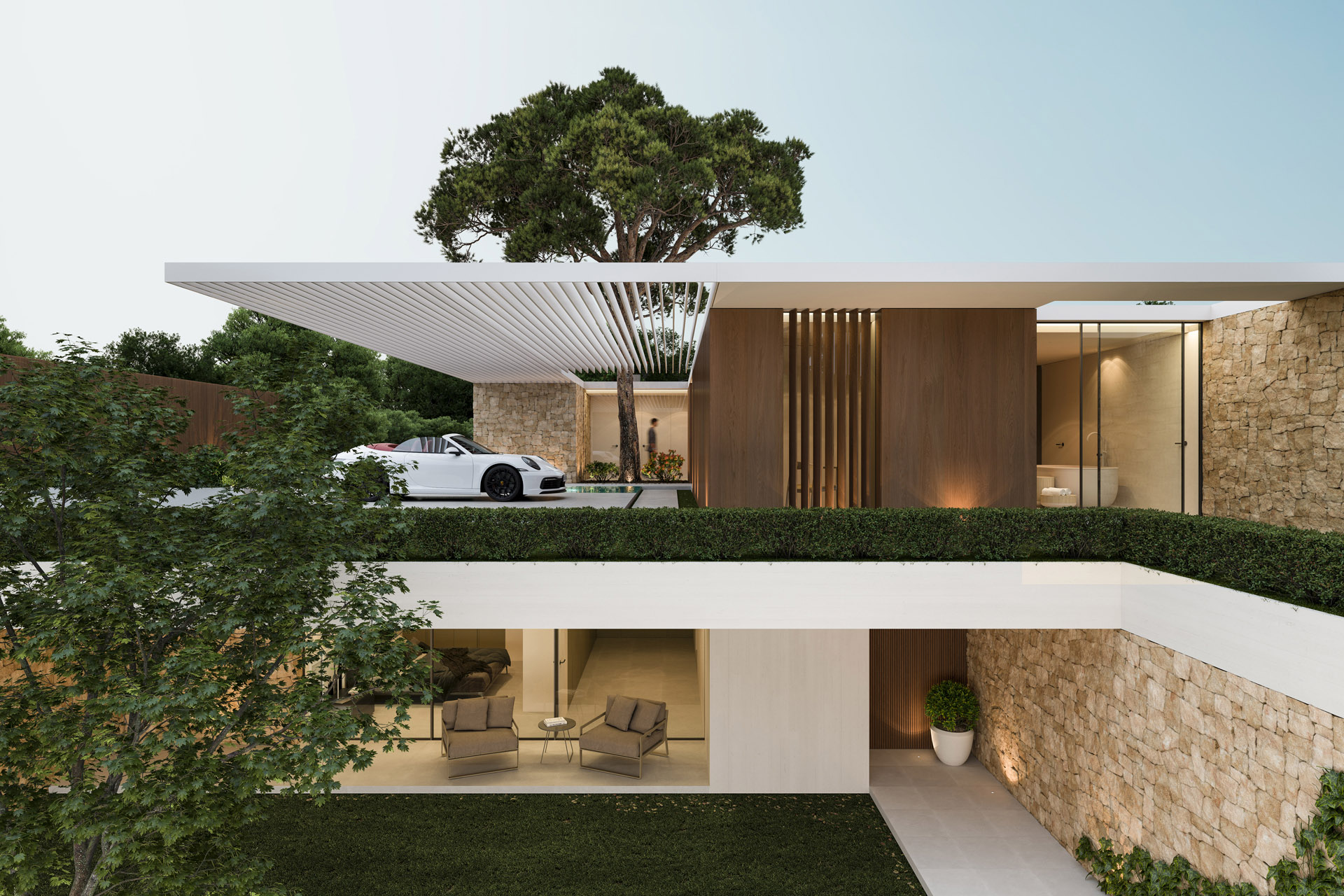 Avoiding its visual impact on the rest of the plot, the guest pavilion is accommodated in the discreet spaces below ground level added around the courtyard to the west, landscaped on different levels and with independent access. These rooms include not only the guest bedroom and en-suite bathroom, but also the general storage of the dwelling as well as the necessary utility rooms. 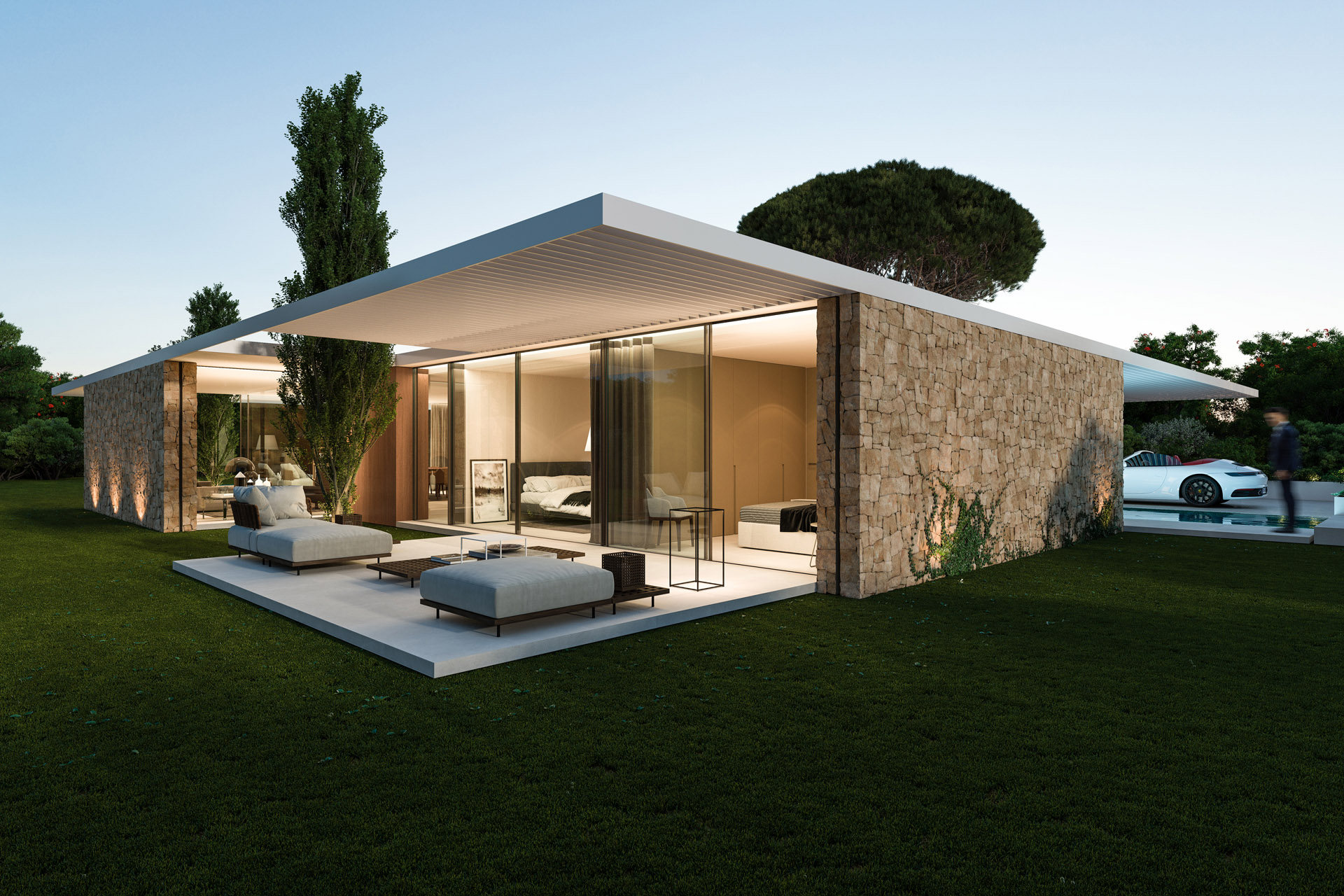 The hall and the courtyard

The entrance hall around a landscaped courtyard welcomes the inhabitant and distributes the circulatory flows of the dwelling around it, organising the rooms into four differentiated areas: the open programme, the private programme, the annexe programme and the excavated programme. 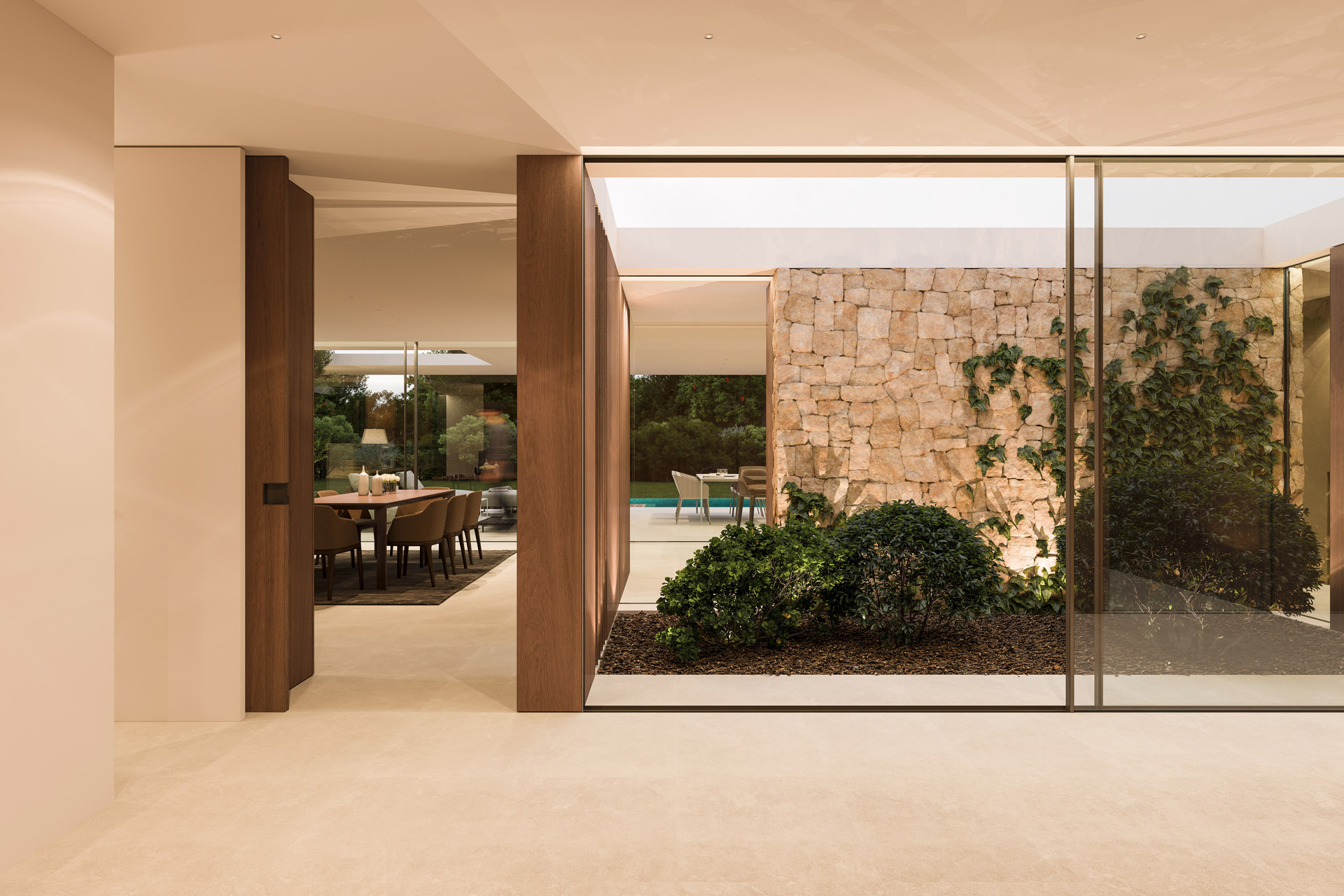