Designated as the architecture studio headquarters, this office space seeks a privileged location in the Valencia “Ensanche”, taking from the location the representative character that should hold.

The project assumes the spatial conception of a single area of confluence in which the activity of different companies is accommodated, promoting the enrichment of interdisciplinary interaction. A continuous space that develops along the nineteenth-century façade, modulated by the transverse disposition of work stations at the rhythm marked by the opening of openings and the structure. 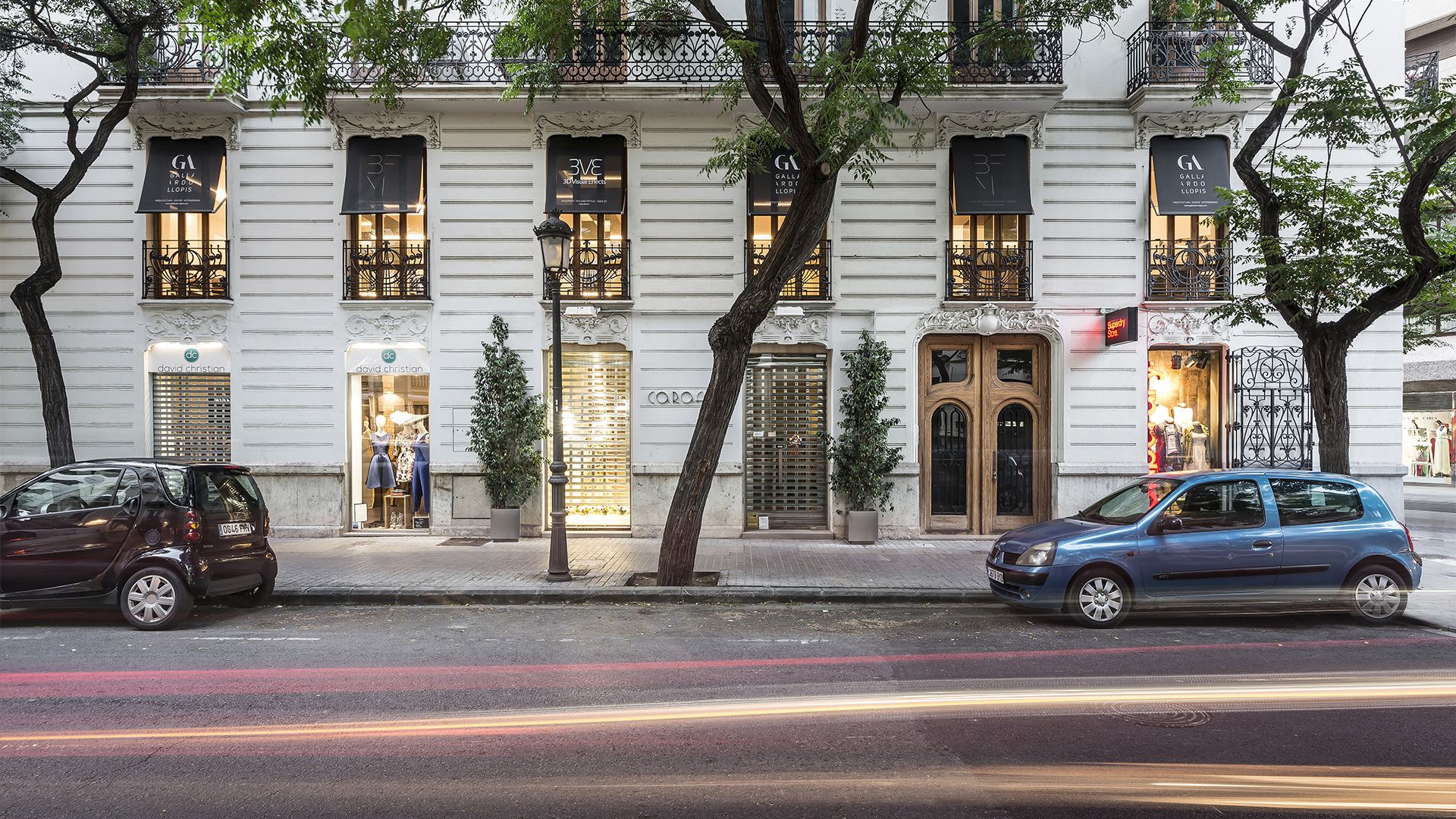 The dialogue between the pre-existing historical envelope and the contemporary office interior is established by means of a gradual formal purification and neutral materialisation, enhanced by indirect lighting that highlights the classic moulding of the façades in calle Sorní, one of the main street in the centre of Valencia.

While the wooden floor, with the planks arranged in herringbone, fulfils the function of homogenising the floor plane, while at the same time conveying the sensation of warmth and proximity that the natural element of the wood embodies, linking it with tradition; the ceiling plane marks a clear distancing towards abstraction. This duality between tradition and abstraction is a fundamental aspect of the studio architecture. 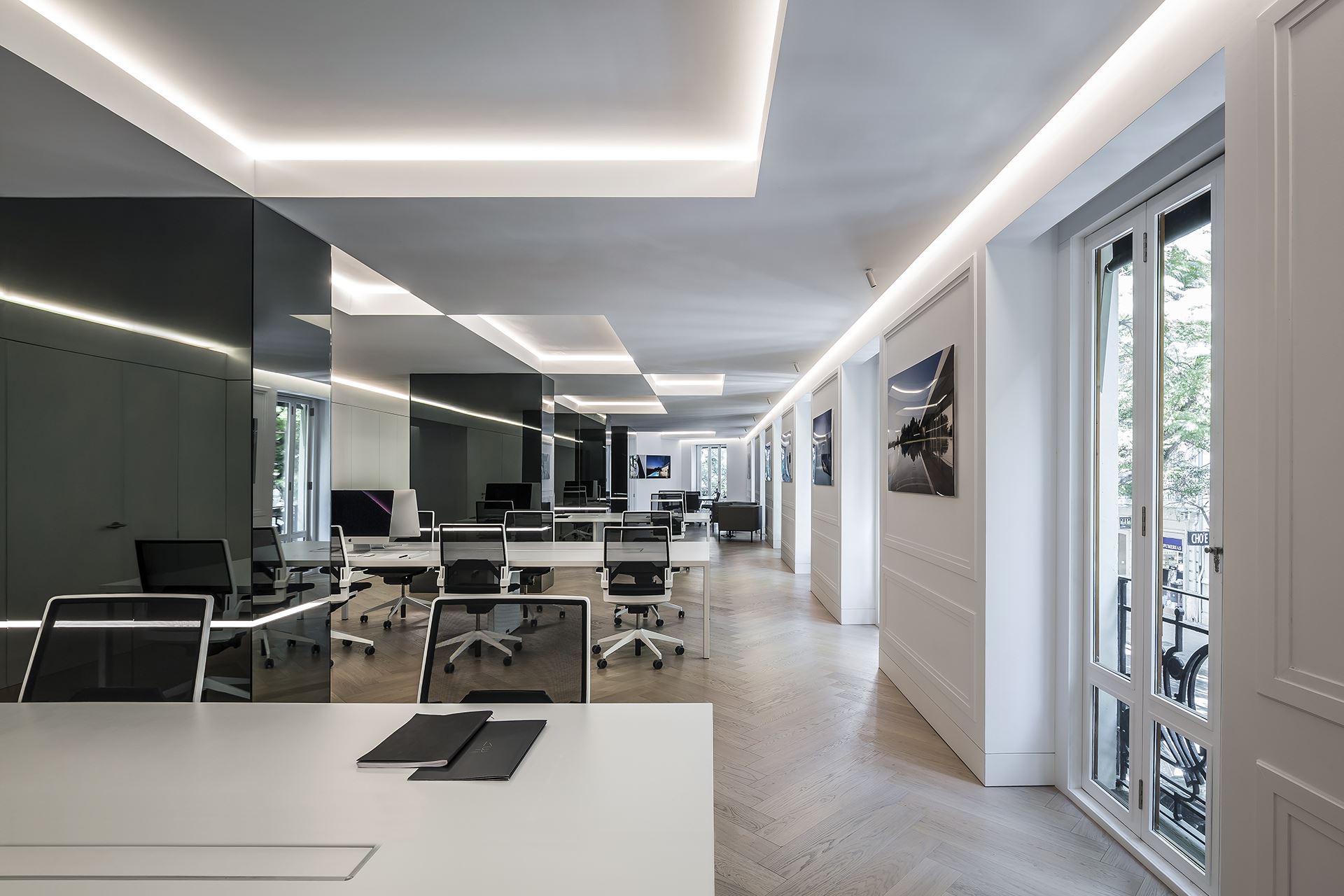 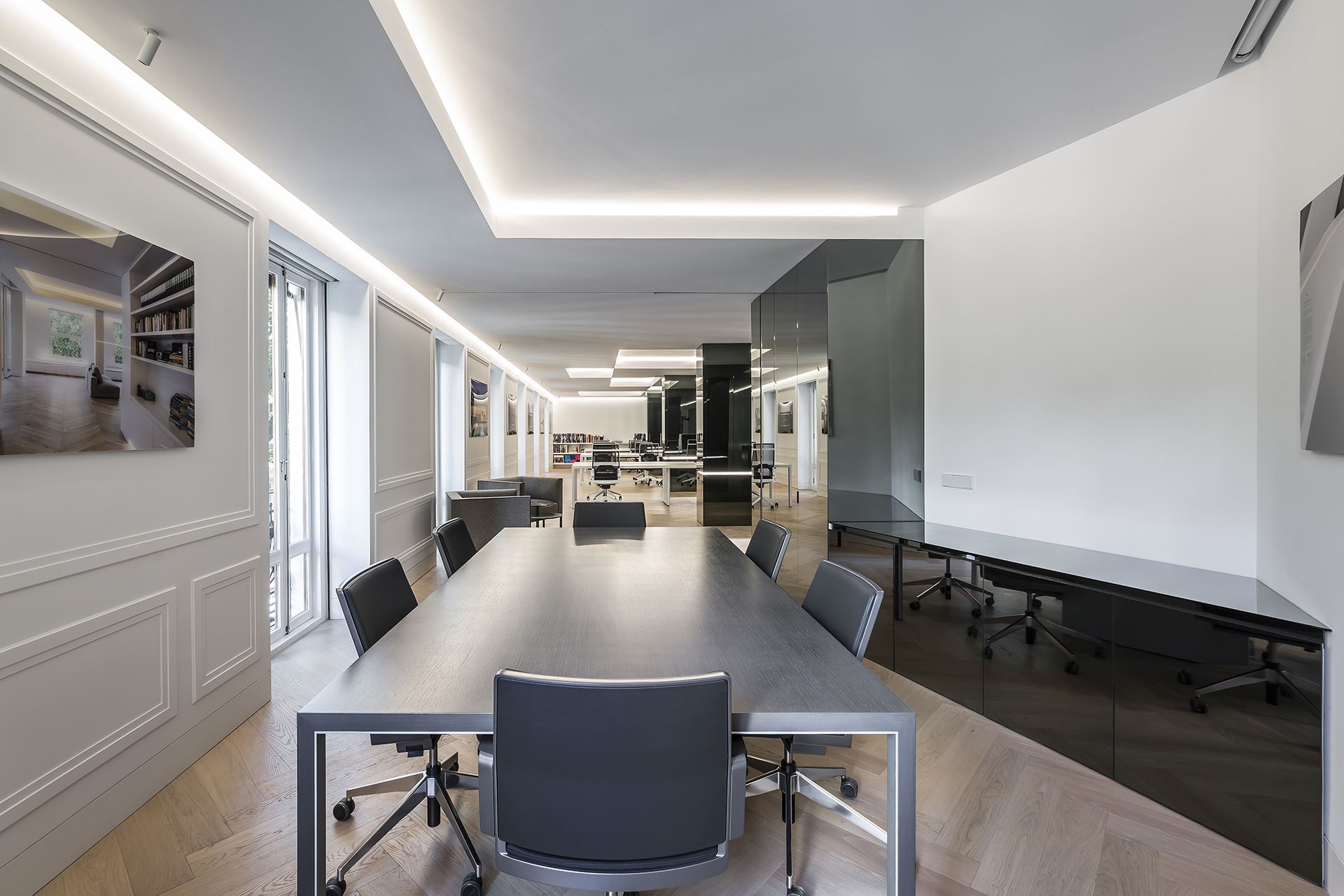 The long longitudinal flight of the main room is balanced by a transversal visual that, through the meeting room, is enhanced by the entry of light from the interior courtyard, sifted by the plant element. 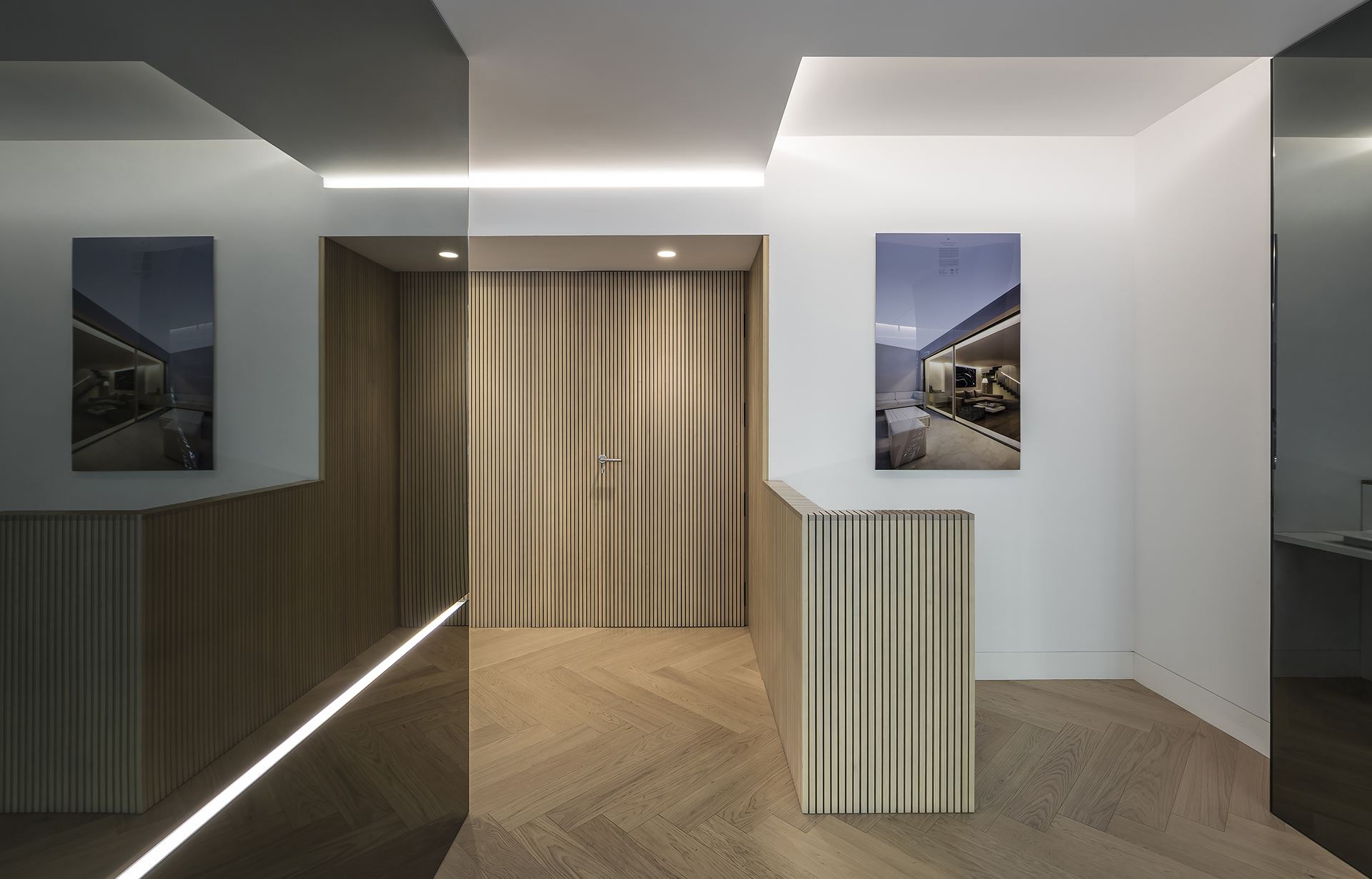 Between both surfaces a series of reflective elements sequence the space, generating differentiated scopes in the common space. These volumes, which adopt the geometry of mirrored prisms, incorporate both the pre-existing structure and the storage, as well as a line of light at an intermediate level.

The space multiplies, prolonging the perspectives in facing planes of suggestive depth with the Valencia “Ensanche” as a backdrop, concepts that characterise the architecture projects of the studio. The diaphanousness of the open space is enriched with the incorporation of the idea of versatility, allowing certain areas to close in order to reach a higher level of privacy depending on the needs of each moment. 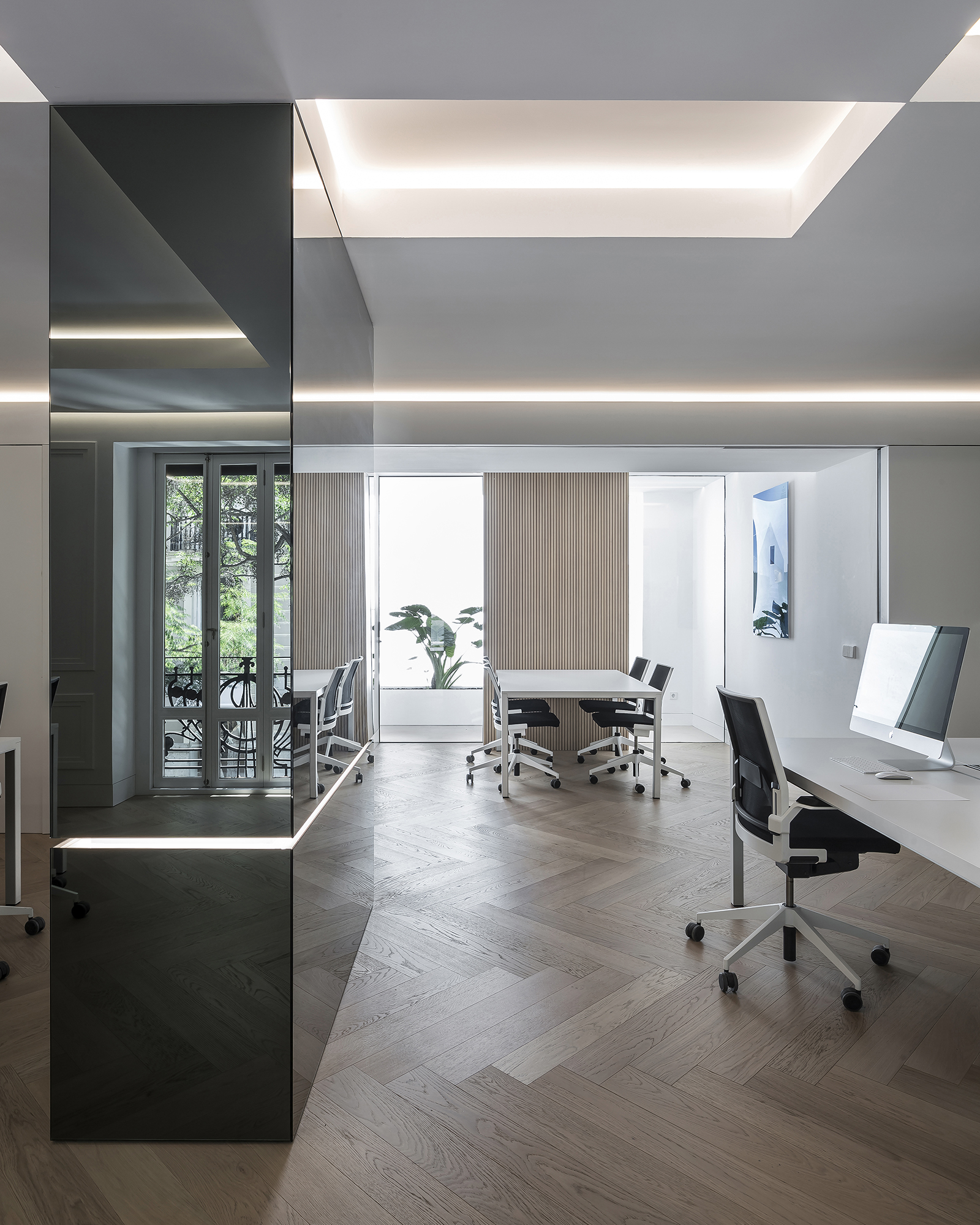 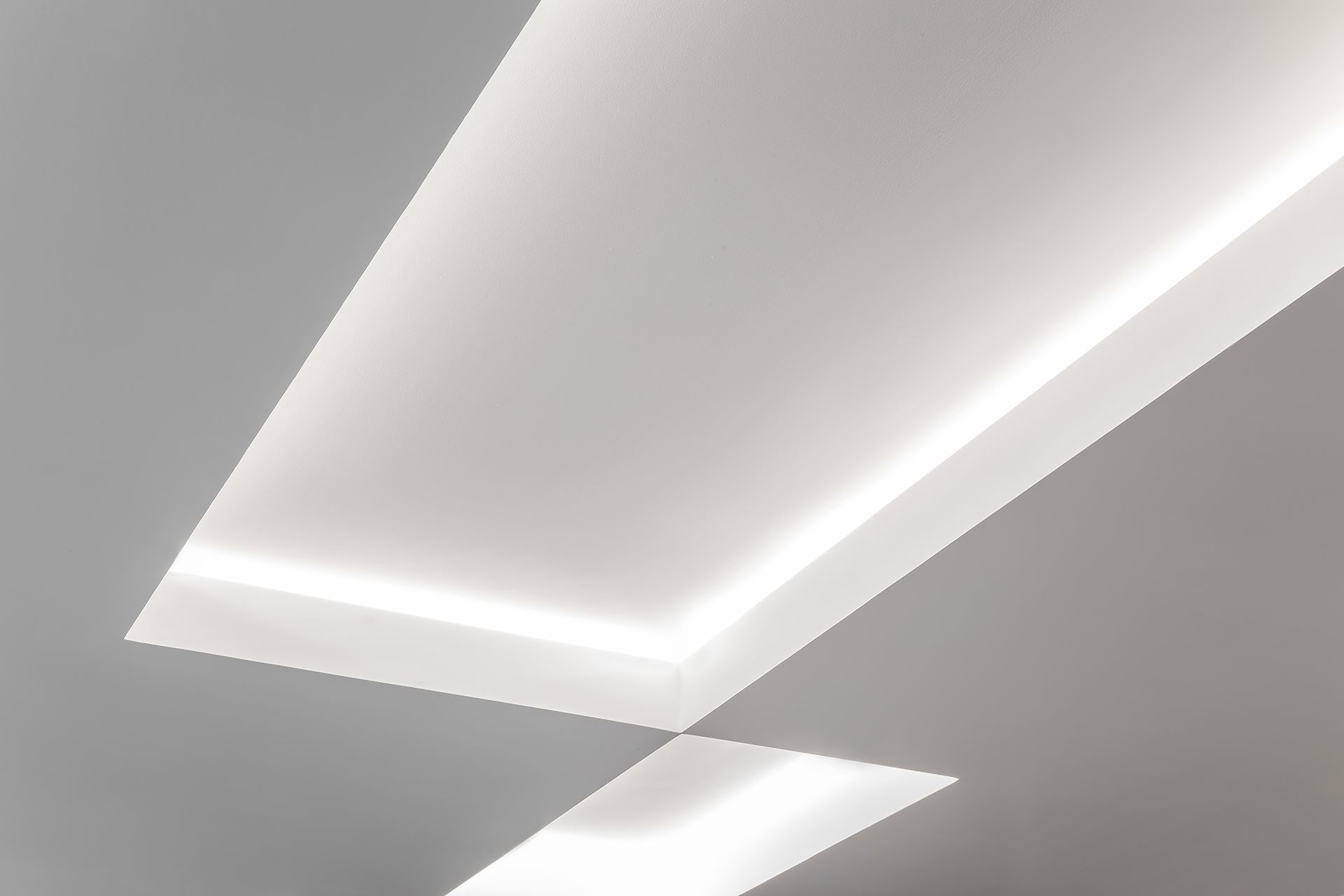 A geometric set of edges found in delicate contact points on different planes and which incorporates diffuse lighting to guarantee light comfort on the work surface. Two opposing planes in which the duality to which the intervention is turned is evident. 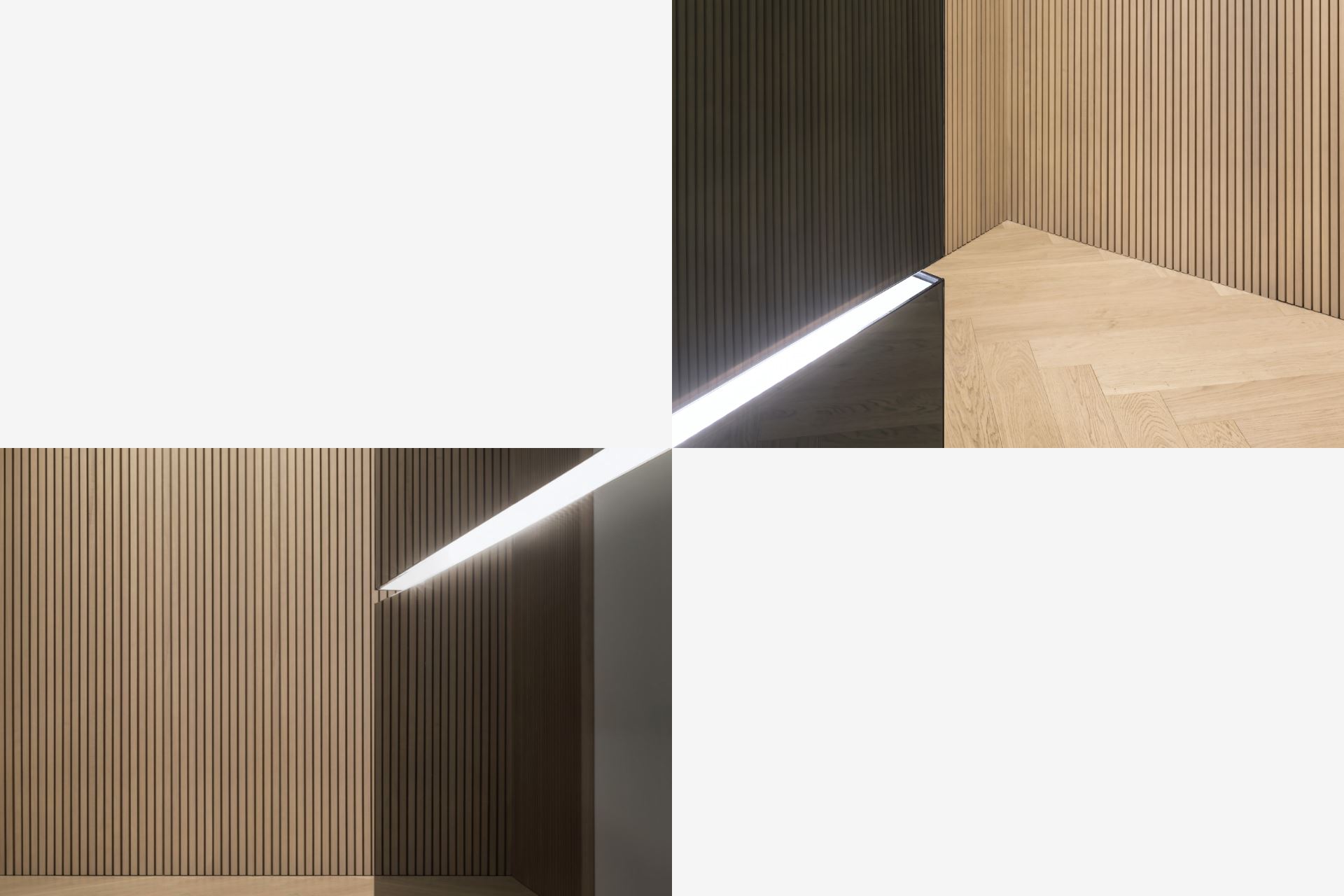 Simultaneously, the subtle materiality work helps to delimit environments of greater recollection within the continuous architecture space. The access to the office is characterized by a texture of glue-glued wood, changing height as well, slightly compressing the space for its subsequent expansion. This warm weft to the touch slides along the walls and folds on itself to form the reception furniture. 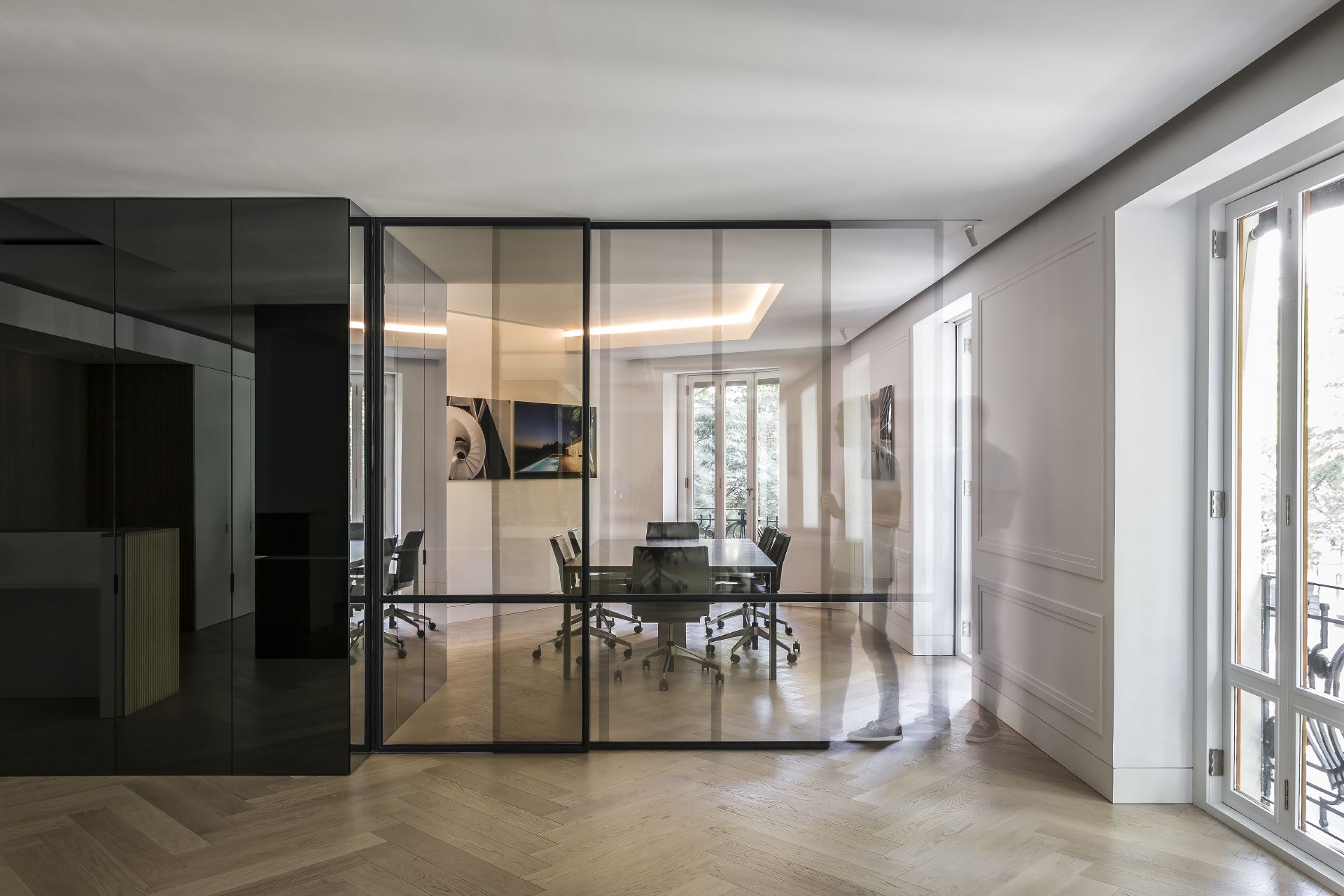 Interior design is key to this project: the flexibility of compartmentalisation between the central office space and different meeting rooms, based on a translucent carpentry with a light frame that, housed inside the construction elements, can be deployed to configure these new environments. 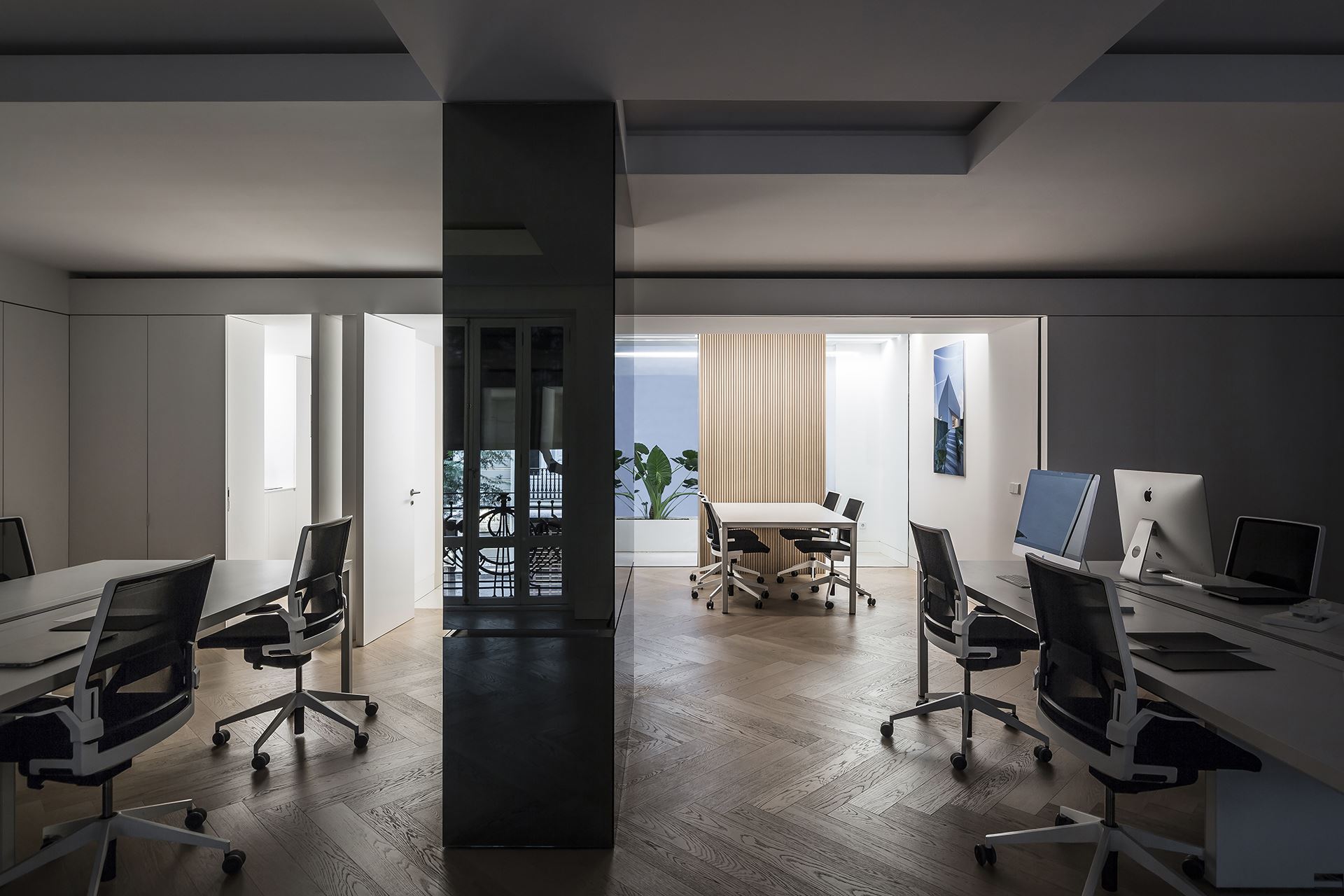 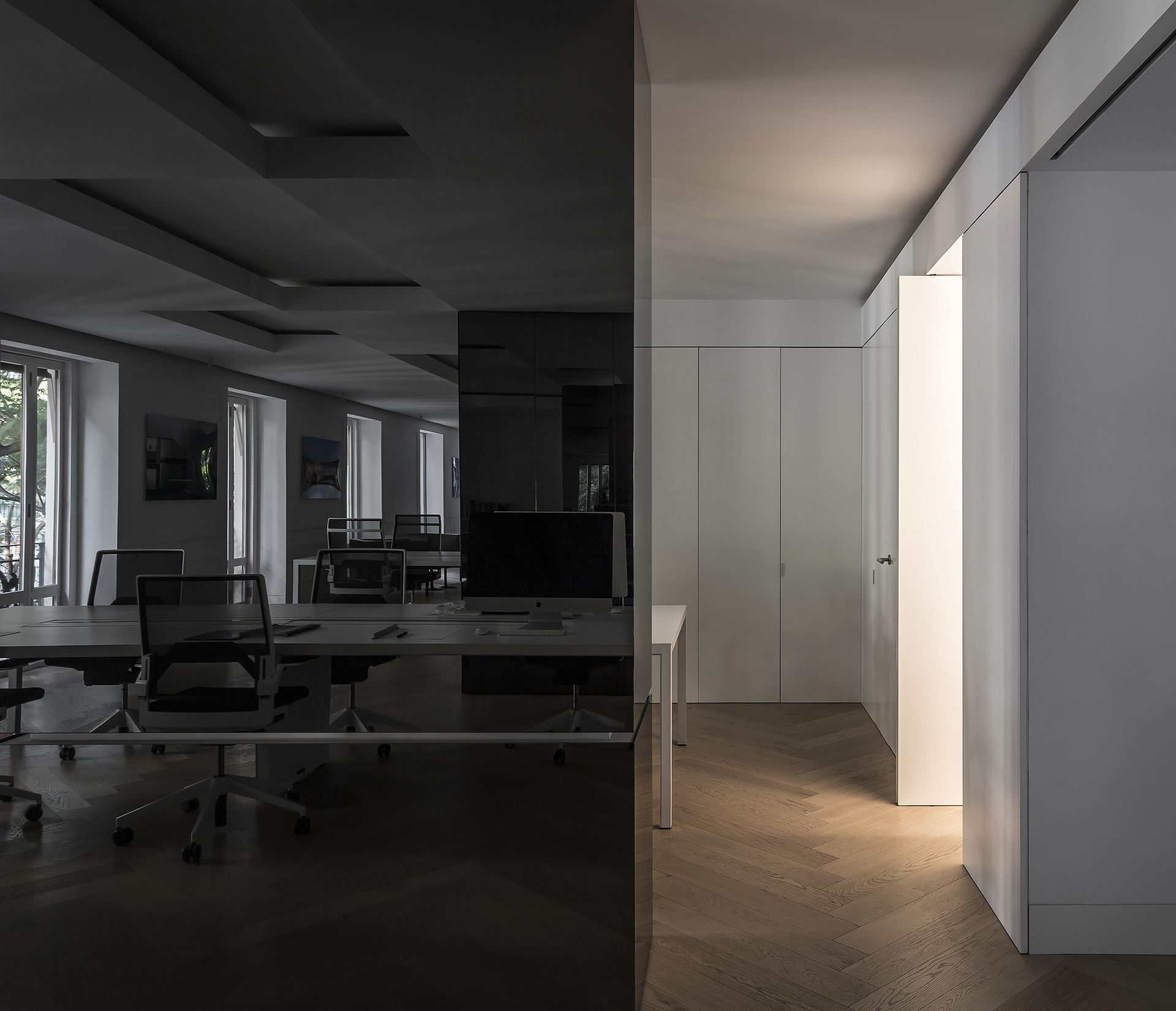