Its location in the green and undulating landscape of a golf course in the exclusive urbanization of Torre en Conill gives the project of this house some starting conditions of an enormous architectural quality. This location is also favoured by its position at the end of the residential complex, which frees three of its elevations from adjacent plots and allows wide visual escapes free from indiscreet glances.

… a series of volumes scattered among the pines, connected through a route that plays with the intense light of the Mediterranean. The sun as architectural matter …

Oriented to the south and of a very elongated proportion, with a marked longitudinal axis, the main differentiating element of this plot is the proximity of a pine forest, a natural space reserved as a landscaped area that penetrates into the plot, characterising it. Between the slender and knotty trunks, the terrain is covered by the shade of some pines that dot its surface. 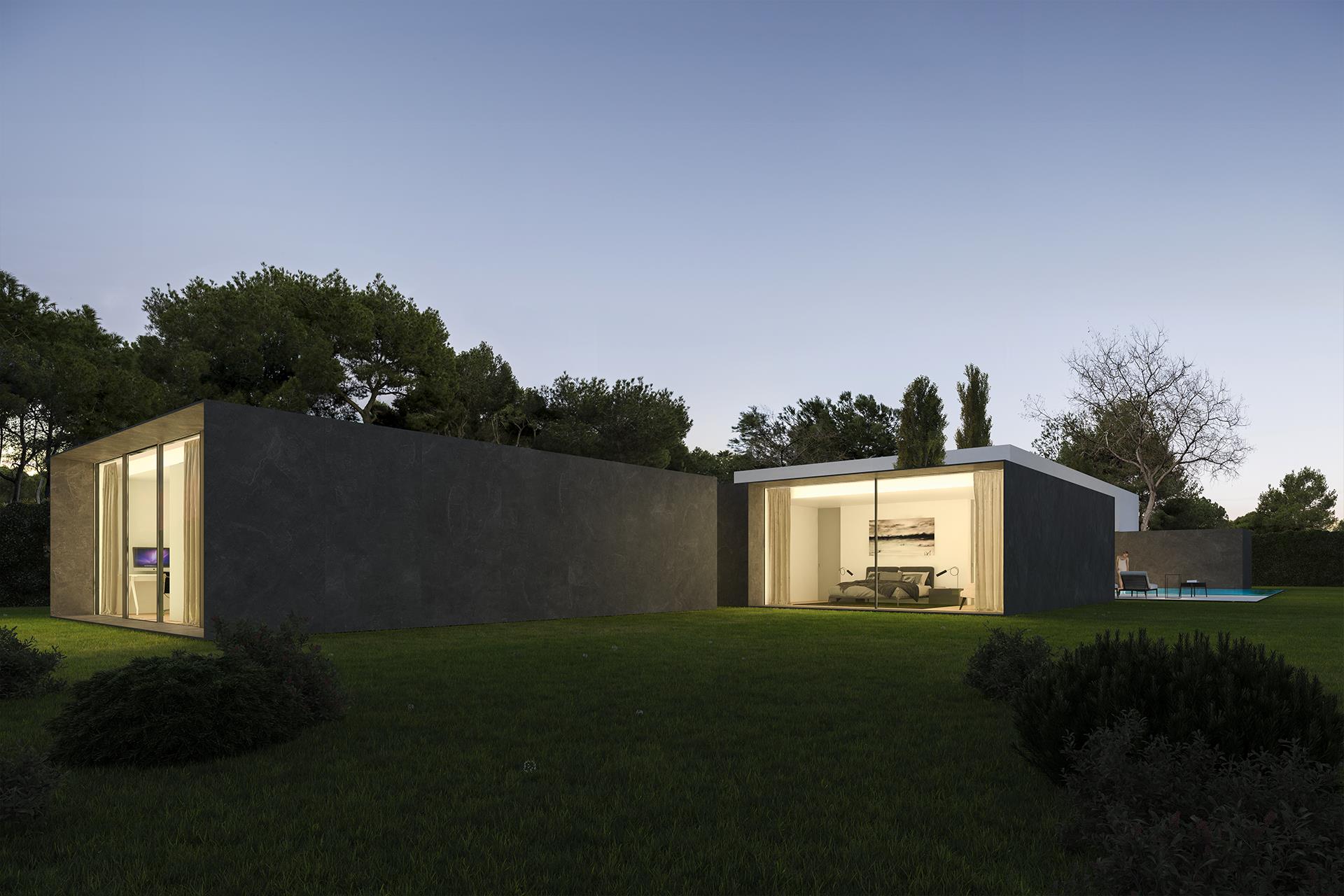 The ground is covered by the shadow of the pines, which dot its surface. Precisely the high presence of the tops is the perennial perspective background that, at the same time, guarantees the permanent privacy of the plot.

The original topography on a slight slope towards the west, generated by a certain unevenness between both ends of the plot, emphasises the predominance of the plot over the landscape, suggesting the northeast as the most appropriate access point. The position and proportion of the plot allow most of the façade to enjoy the south orientation, which is more advantageous from the point of view of solar capture. 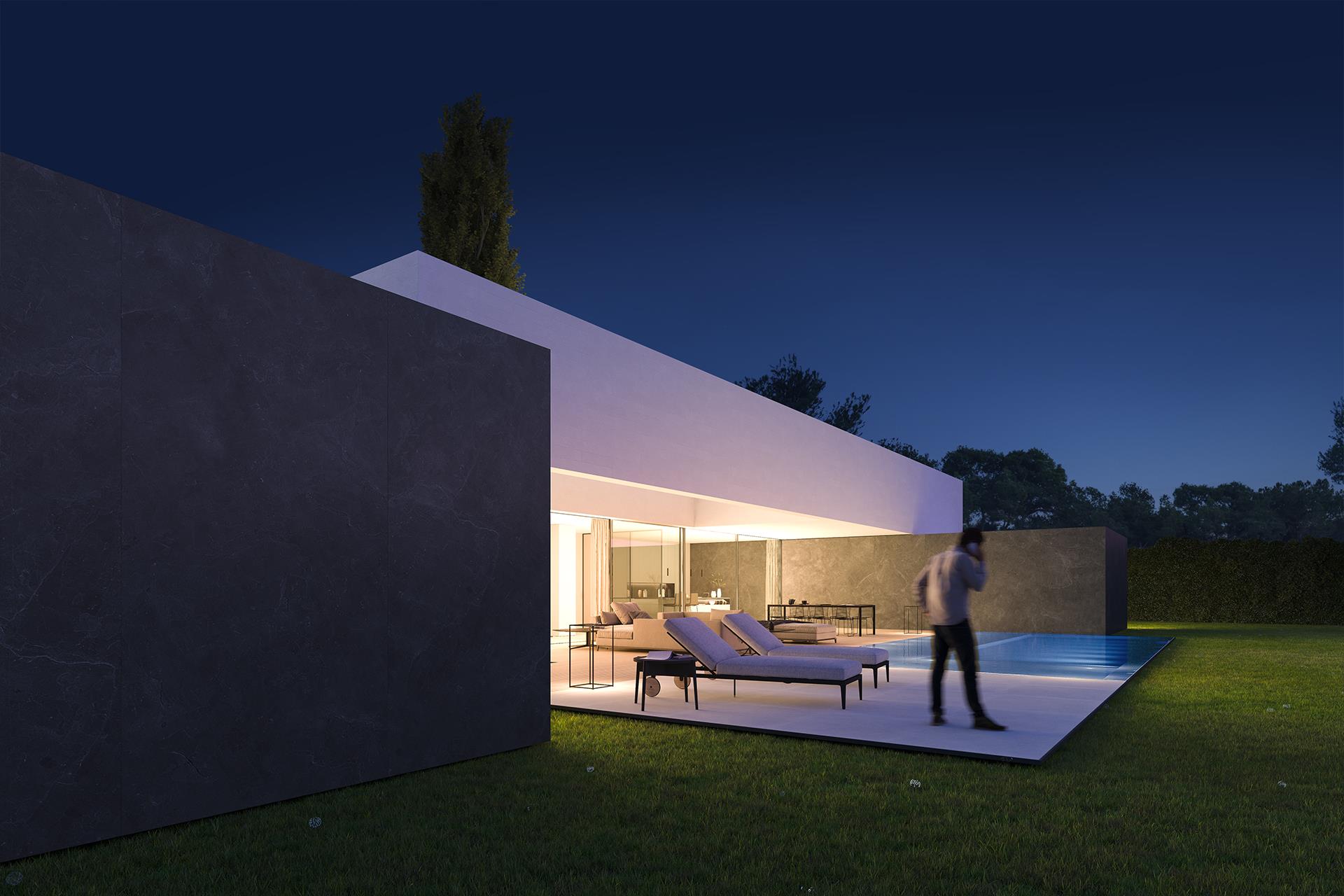 The conjunction of all these gifts, together with the benign climate, make this site an idyllic place where you can savour the benefits of life outdoors, imposing the extroverted spirit of a marked Mediterranean character.

PAVILIONS AMONG THE PINES

One of the first decisions as architects results in organizing the house in two clearly differentiated areas, the day area linked to the most public part of the plot and the night area linked to the most private part, benefiting in any case from the proximity of a large green common area of the urbanization of Torre en Conill . Through fragmentation, these two pieces are dispersed in different volumes, colonizing the space between the pre-existing trees, preserving them.

A system of pavilions connected by a route that links the different parts of the programme without losing formal independence. A connection between volumes with ethereal interstitial openings that allow the passage of light and an open relationship with the environment. 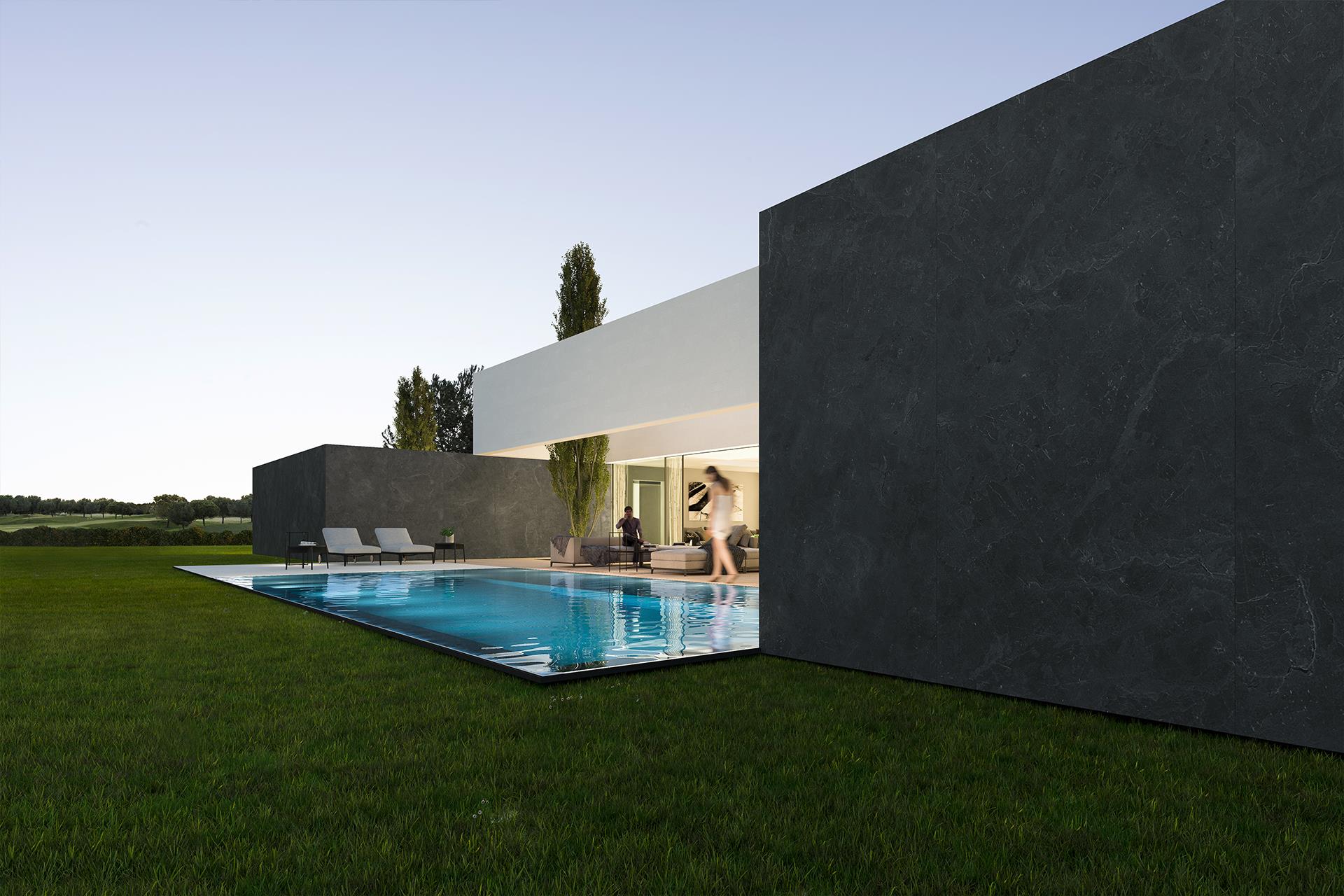 THE GEOMETRY SCULPTED BY THE PASSAGE OF LIGHT

The design of the architectural project establishes that the spaces in the day zone of the house are framed by the design of a powerful upper volume that, throwing itself into the cantilever, casts its shadow over the exterior spaces it houses. This forceful flown box, which protects access to the dwelling, is perforated in the terraced spaces next to the water surface of the swimming pool to allow for adequate sunshine and the growth of the trees that cross it, integrating into the leafy vegetation of the nearby Torre en Conill. 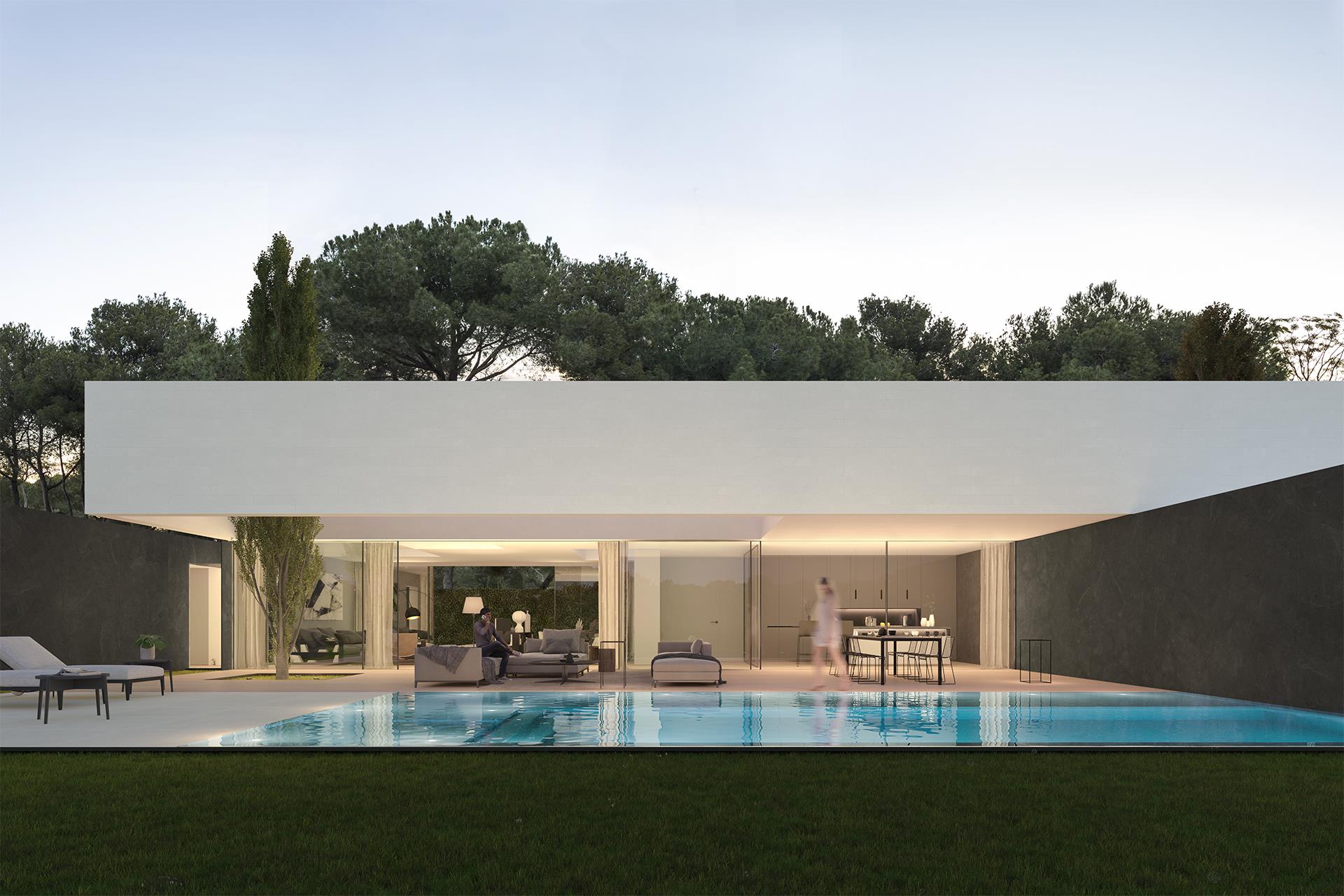 The apparent simplicity of the white prism increases its spatial complexity by punching itself in the central zones to allow the conformation of skylights and patios that flood the interiors with luminosity: a geometry sculpted by the passage of light, concept as architects we adopted to give name to this house in Torre en Conill. 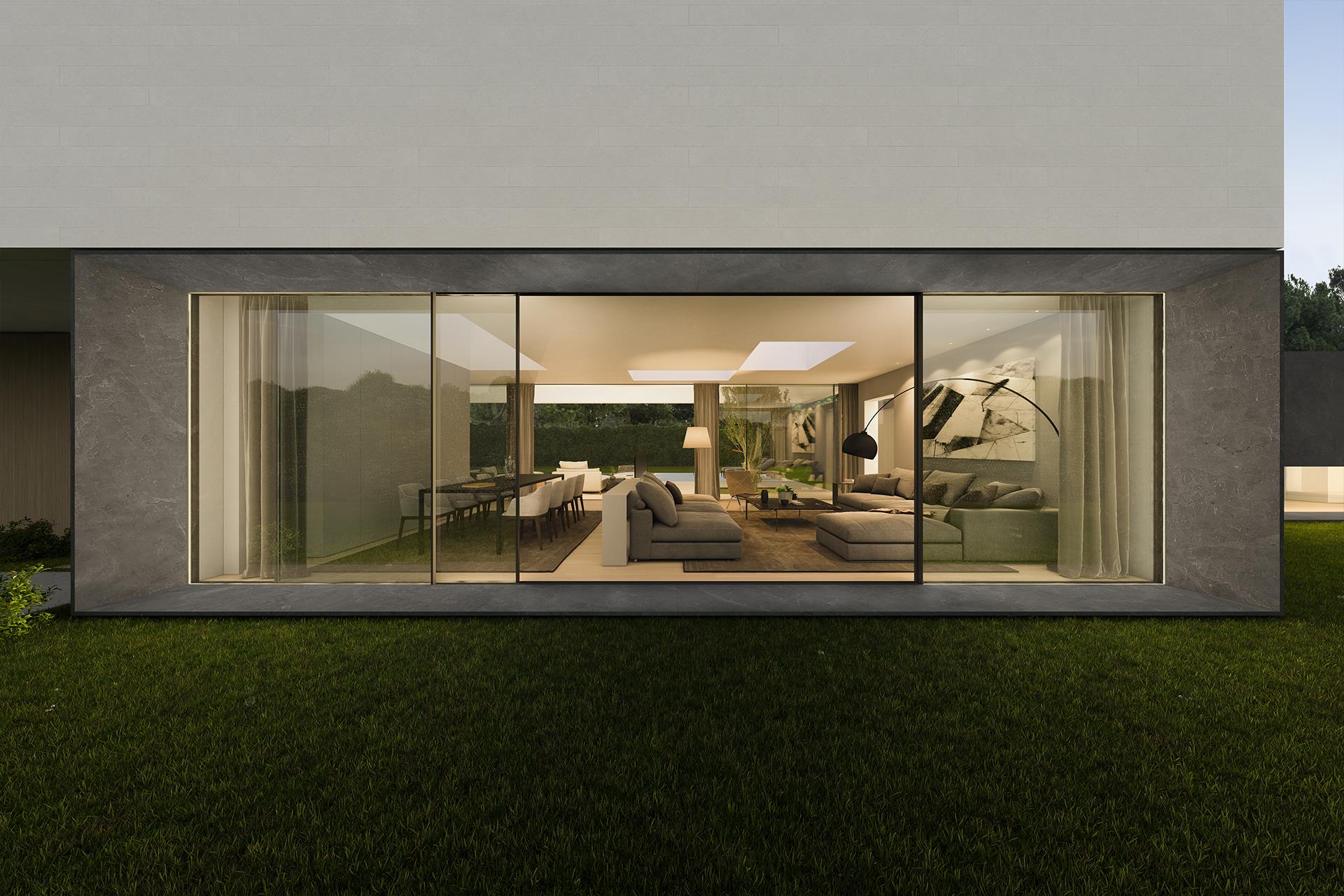 The whiteness of the crowning piece contrasts with the stony materiality of the lower volumes unfolded by the plot, as if they were pebbles dragged by the current, orienting themselves to capture controlled, privative visuals. And in the interiors, between large glass surfaces that blur the boundary with the exterior, the warm touch of the wood vertebrating all these spaces. 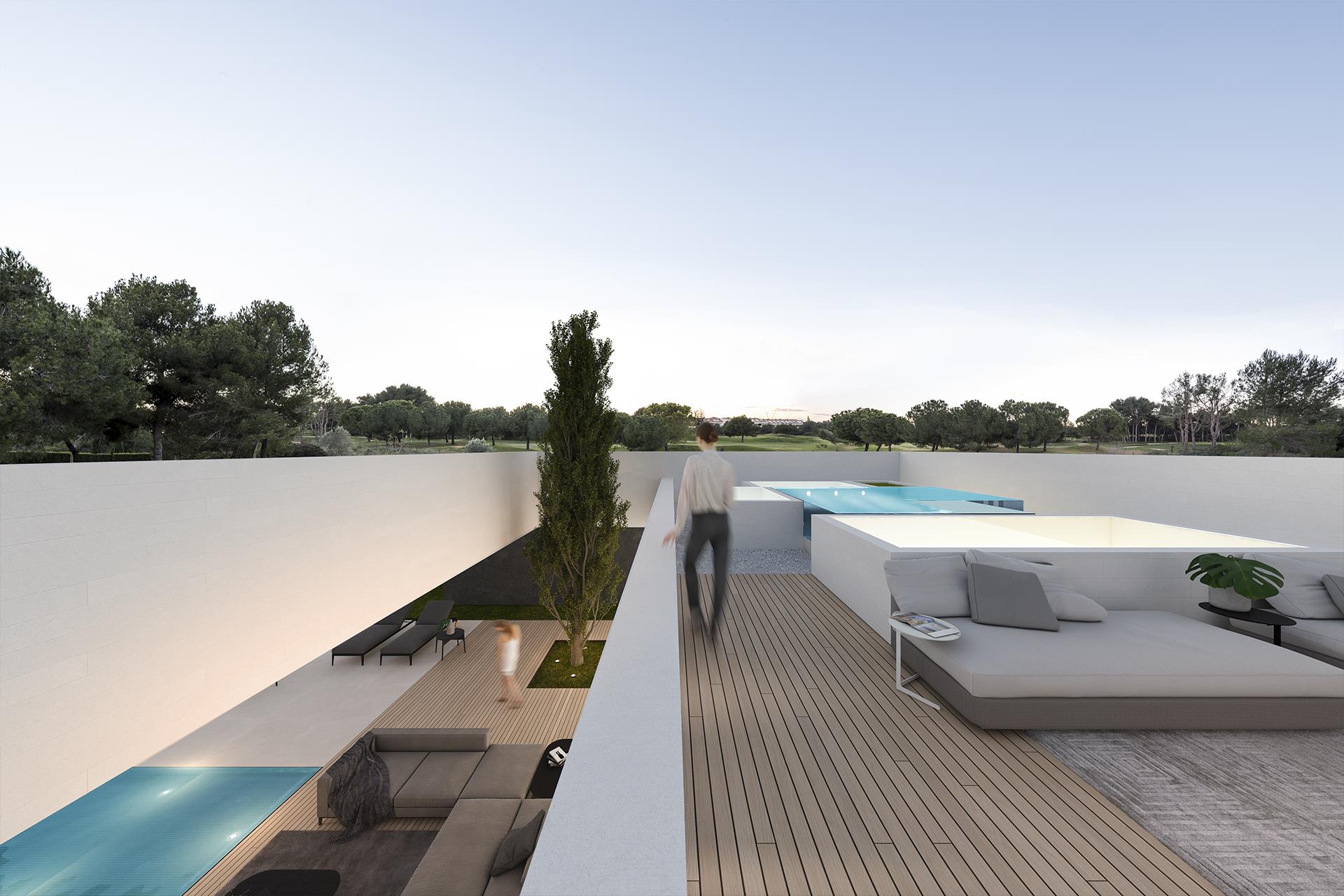 Under the blue sky, the upper terrace reveals itself as a place of opportunity, from where to scan the horizon of a landscape that undulates towards the west in the cool sunset. In the architectural project of this house incorporates a contemporary pool from where you can enjoy pleasant baths in the light of the stars and the nearby landscape of the urbanization of Torre en Conill.