Founded in 1978, the Gallardo Llopis Arquitectos architecture studio has sought, through the synergies of professionals specialising in different fields, to achieve a common objective: to create an architecture in which technique and beauty come together.

The studio has carried out different architectural projects in Alicante during more than 40 years of experience. José Luis Gallardo, founder of the architectural firm, focuses much of its activity in several municipalities in this province, such as Denia, Javea, Moraira, Calpe, Altea, Benidorm and even Villajoyosa, hence our firm is strongly connected with the area. At present, the studio's trajectory tends towards internationalization, with works in distant geographical areas that are undertaken without abandoning the roots, preserving the essence inherited from the mastery of the profession.

The results of meticulous work are projects in which the language of contemporary architecture is approached from a personalist approach, characterised by structural vigour, formal purification and the warmth of the interiors, through technical precision and a willingness for careful execution. All this is possible thanks to having a large staff of highly qualified professionals in the different fields of design, from the initial idea, to the final construction, including graphic representation or technical definition.

THE BOND WITH THE ARCHITECTURE OF ALICANTE

The studio identifies with contemporary architecture and projects, modern and strongly linked to the environment and the landscape. The design of each element plays a very important role in the overall architectural project. The coast of Alicante and its surroundings offer privileged surroundings, either for its magnificent views of the Mediterranean Sea or its landscapes and vegetation, which as architects represents an ideal place.

The climate, very similar to the one in Valencia or Ibiza, warm and pleasant, allows the architecture to open up to the views and the sea and enjoy large outdoor terraces. This duality of interior/exterior spaces, where architecture is experienced and the moment and place is enjoyed, is one of the studio’s most recurrent project concepts. Several of the houses, hotels, etc. that we have developed adopt these qualities of the place which allows us large glass panels so as to relate with the environment.

Among other architectural projects carried out in the province of Alicante, the rehabilitation of an 18th century manor house converted into the Buenavista hotel in Denia with a Mediterranean village annex and surrounding gardens stands out for its singularity. As architects, it is a challenge between modernity and tradition. On the magnificent beach of Las Rotas de Denia several single-family houses have also been built. In Moraira several hotels were built, such as Sol-Park, single-family homes in El Portet as well as urban plans such as Vista del Valle. In Villajoyosa the rehabilitation of the Masía de la Finca La Barbera was carried out as a result of a restricted competition. 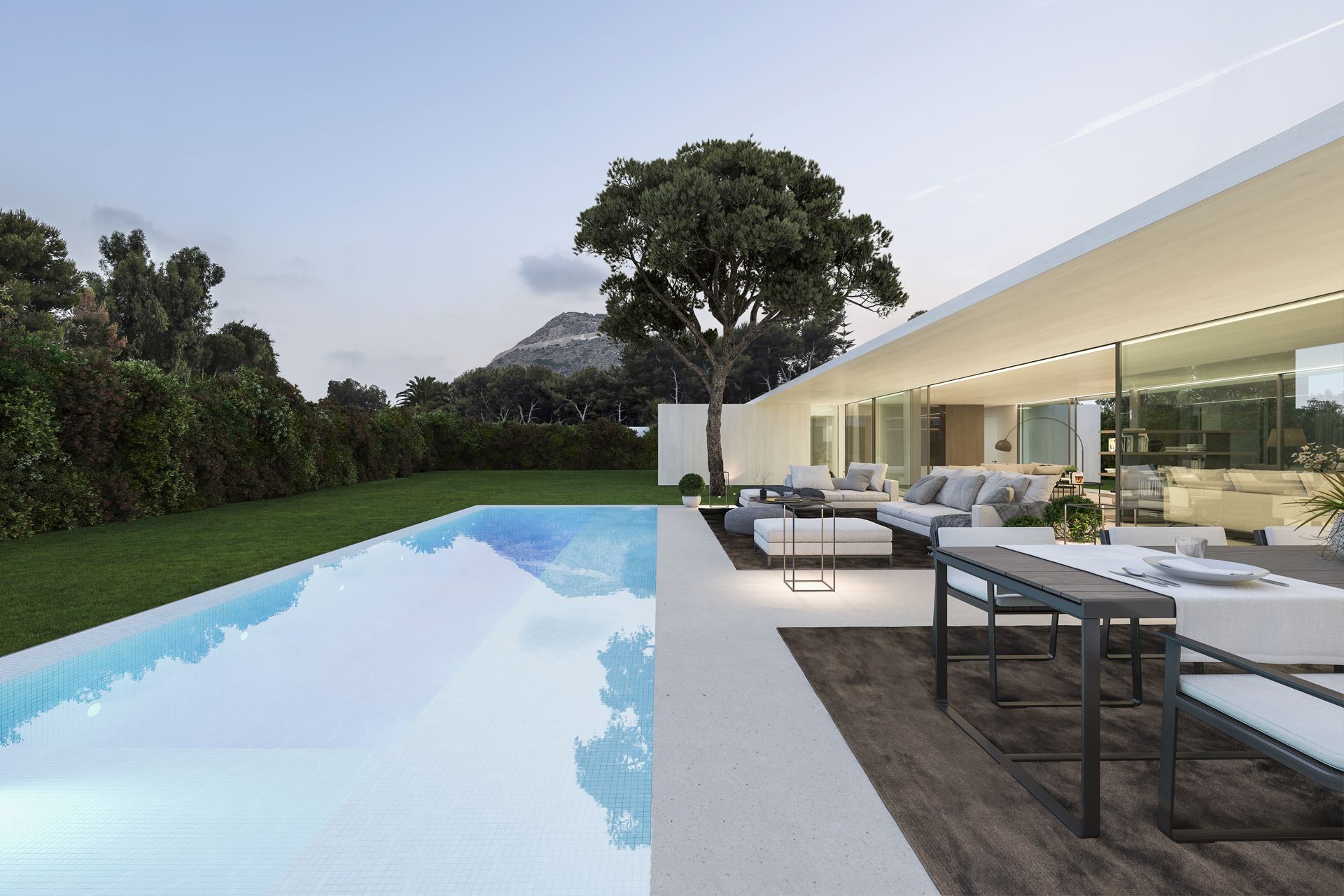 On the beach of San Juan (Alicante) is located one of our latest architectural projects, a unique single-family home. The conditioning factors of the place and the programme lead to a volumetric duality in which the night and access areas are formed by much more compact parts while the day zone between them enjoys a transverse opening into the environment.

The concept of the project starts from generating an oasis close to the sea… a resting place, where you can find shelter in the coolness of the umbraculum, surrounded by vegetation and the lively reflections of the water. Materiality as the minimum expression for refuge and privacy, in dialogue with the intense light of the Mediterranean that with the touch of its breeze announces its close presence…

A privileged environment between the rocks and the sea is the starting point that the architecture of this house enjoys.

Cuddled by the waves of the Mediterranean, the plot that is the object of the project is located at the foot of Las Rotas, dominating the horizon of the coast of Dénia between pine groves and hidden coves next to the steep cliffs that make up the Cape of San Antonio. 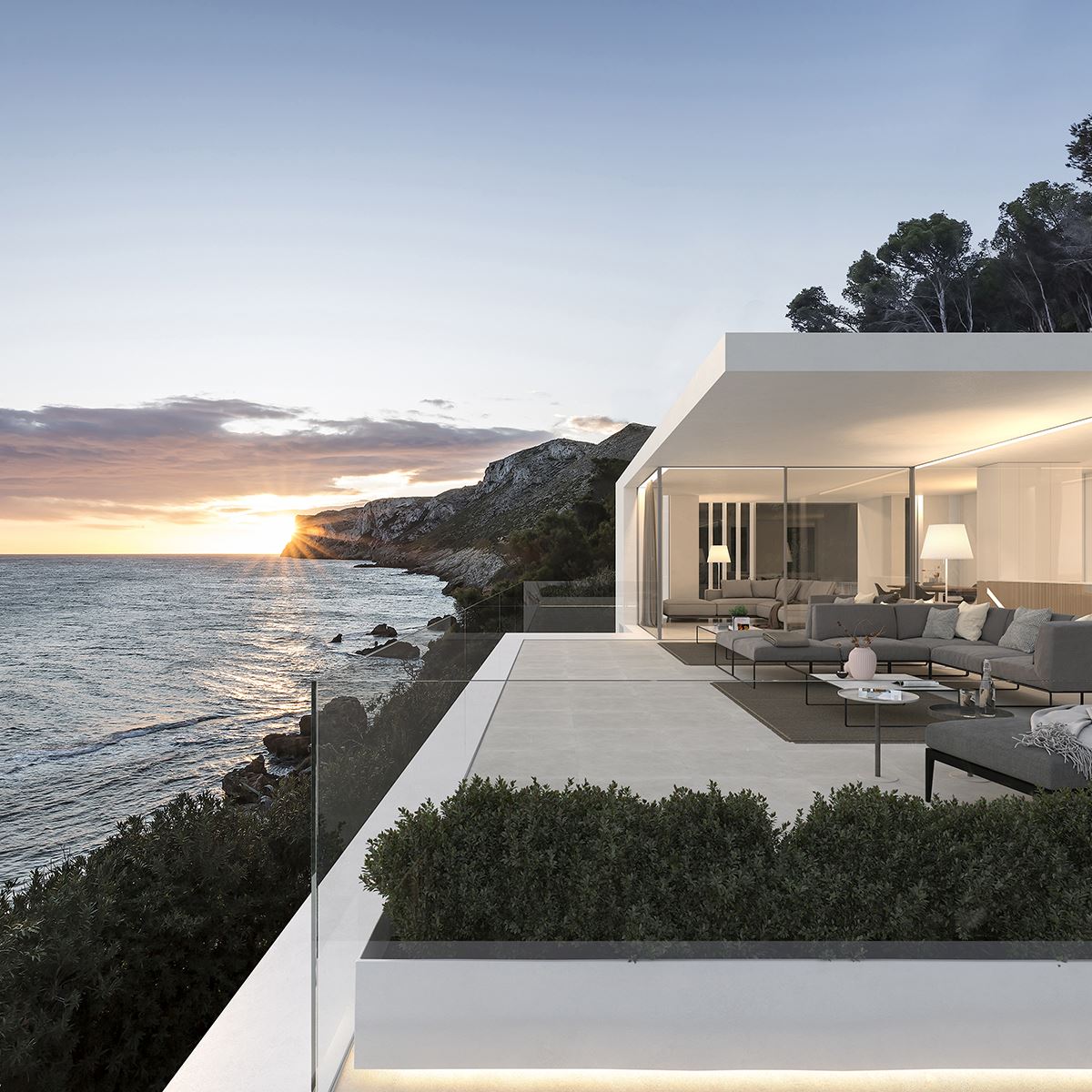 The opportunity to have such a unique location at the foot of a cove in Denia (Alicante) is achieved through an exercise of reconfiguration of a pre-existing building, a distinctive project as architects. Without altering the original volumetry of the house, a process of formal synthesis and programmatic redefinition of the architecture is carried out to adapt the old structure of the house to the new architectural needs. 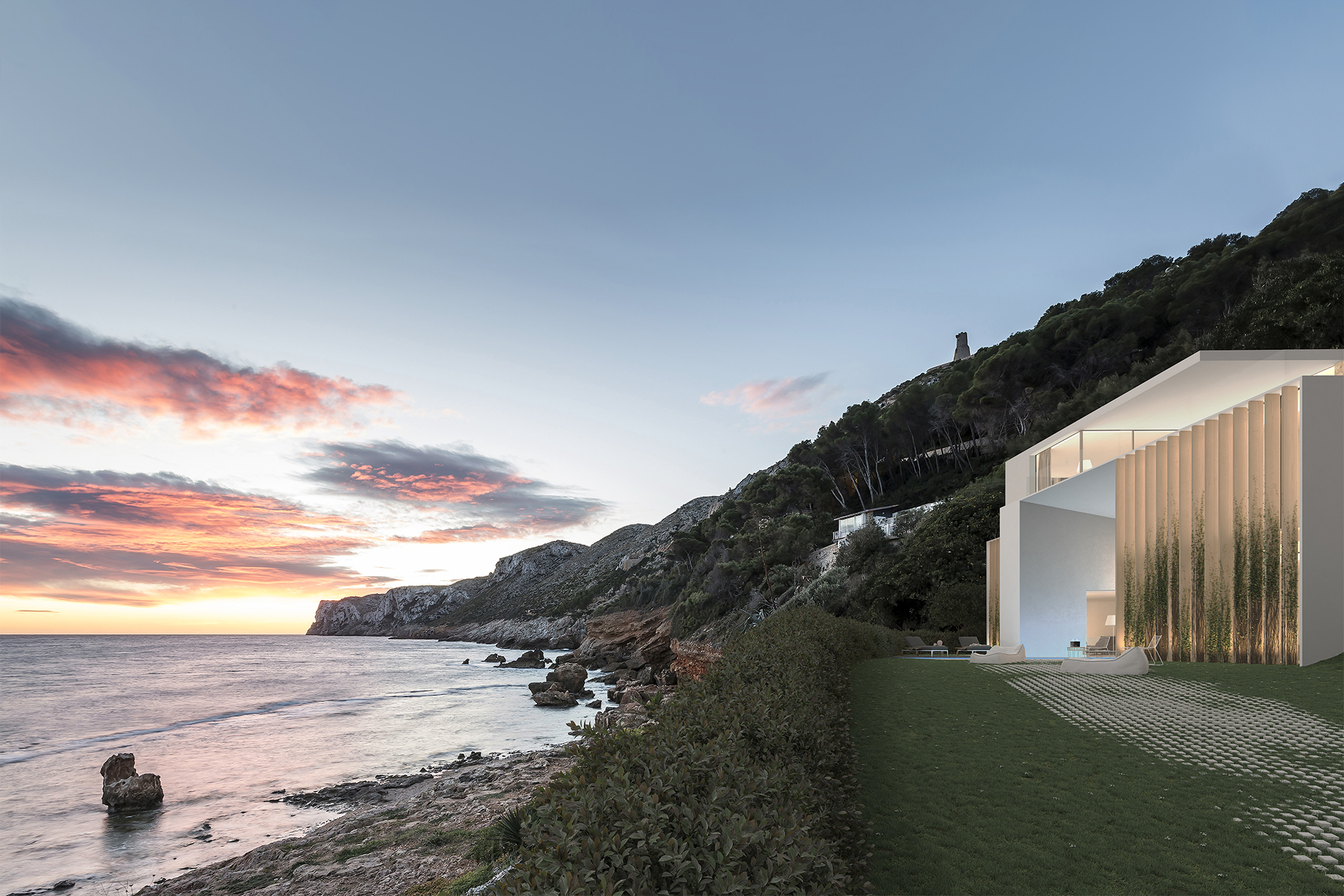 The “House over a cove”, located on Benidorm’s western beach, takes advantage of the views and the landscape as a background, taking advantage of the incomparable location to enjoy the typical breezes of the Mediterranean sea. The day zone enjoys a large window that allows the dissolution of the interior/exterior limits achieving to pervade the life of the house with views to the sea and its blues.

The swimming pool and terrace take on special prominence in the project, as they enjoy this same element and represent an outdoor space where much of the life in the house is concentrated. The swimming pool seems to merge with the blues of the sea, giving the sensation that the Mediterranean water reaches the feet of the house. 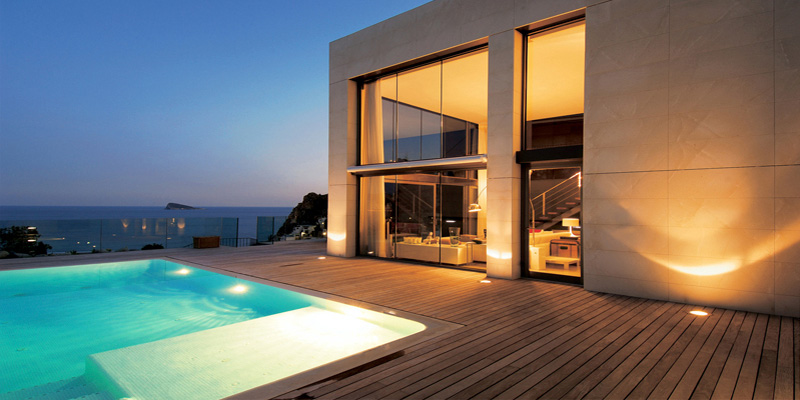 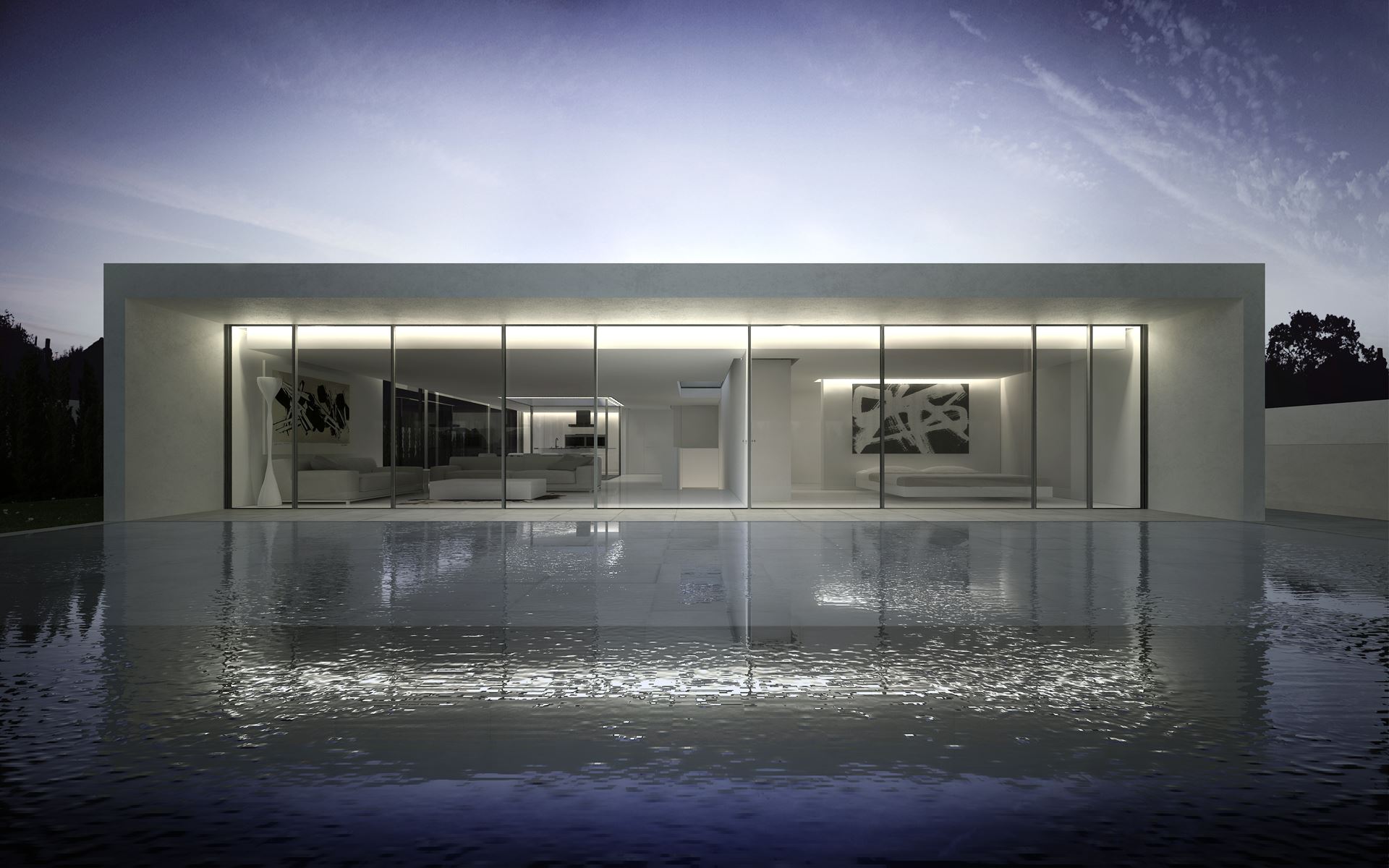 The project of the single-family house in Petrer (Alicante) is an other example of one of the projects we have carried out in this area. It looks for minimalist shapes and geometries, but looking for comfortable and warm spaces.

As if it were an excavated rock, the plot is emptied in the same way as a quarrying operation, giving rise to a lower courtyard on the semi-basement floor. The swimming pool is especially important because it can enlarge its surface area and multiply the reflections it generates: